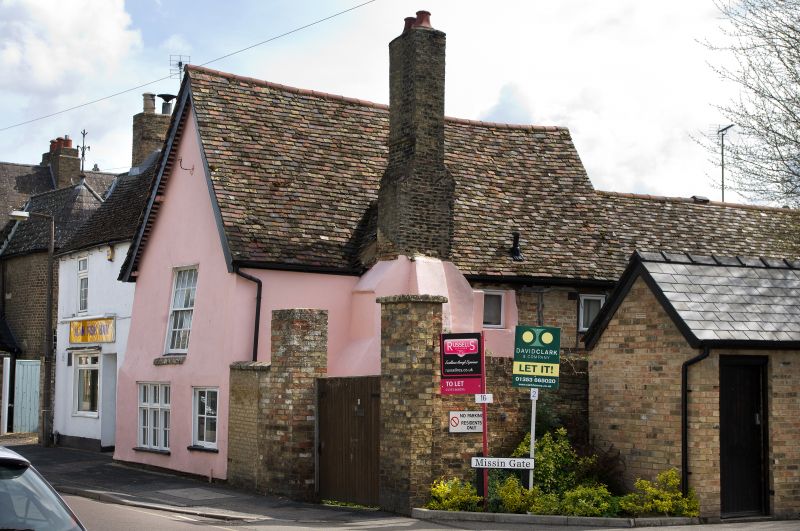 A C15 commercial and domestic building, timber-framed and of two storeys, with a significant single-storey element to the rear.

A house of the C15 constructed of timber framing with later brickwork, mostly rendered and painted.

EXTERIOR
Two storeys in height, it has a steeply pitched, gabled and plain-tiled roof. The west, Broad Street elevation presents a gable to the street with plain barge boards. Two window openings at ground–floor level contain a modern frame to the left, with an earlier C20 horizontal-sliding sash to the right. Above is a single, central opening containing a 10 over 10, horned sash on a brick sill. The upper floor is set back from the ground floor at first-floor level, and leans back from it. The façade breaks back to the left to meet the adjoining building. To the right it is adjoined by a brick boundary wall and the taller modern brick piers of a vehicular gateway.

The south elevation is dominated by a substantial, externally expressed brick stack situated towards the west end. The shaft is of red/brown brick, shouldered, and coped on the east side, with a little tumbling in. It has been heightened with yellow brick in the C19. Below the shaft, the stack is rendered and painted, and expands in two stages. A narrow flue has been added to the face of it which tapers to the base of the shaft. There is a small, modern window opening between the stack and the Broad Street boundary wall. To the right of the stack, at ground-floor level, the rendered wall extends for two window bays and a doorway, to the junction of the historic building and the modern extension to the east; the window frames and door being modern. At the upper-floor level, beneath the eaves, a reused timber, with empty mortices on the face, forms the wall plate between the stack and the end of the historic building. One window bay is rendered while the remainder of the historic walling is formed of a timber-framed panel, with orange/yellow brick nogging laid to courses in stretcher bond, which sits on a rail at 1st floor level. The framing contains a single-light, transom-opening modern window. The end of the framing marks the east end of the historic fabric and the junction with the modern extension. The modern extension roof is lower than the east gable of the of the historic east end, which rises marginally above the modern roof and appears rendered with a plain barge board.

The adjoining modern extension is a single-storey, cement-rendered and painted building, with attic rooms and roof lights. No access was gained externally to the east of the modern extension, nor to the whole of the north elevation.

INTERIOR
The historic building forms two rooms on the ground-floor: a main room at the west end, and a stair and entrance lobby. The lobby is divided from the modern extension by a modern brick wall, which forms an entrance screen, or baffle, for part way across the building leaving a doorway at the north end. This marks at ground-floor level the east end of the historic fabric and stands beneath a C15 wall at the upper floor level. Against the north side of the lobby, a modern wooden, stick baluster staircase, rises westwards to the first-floor. Entrance to the main, west room, is via a C15 doorway with cyma-moulded jambs, and a four-centred, arched head with sunk spandrels. The doorway was set within a post and panel screen, which survives on the north side, but which appears to have been lost on the south (although fragments may survive behind the modern surface). The doors themselves are not original to the doorway, but rather appear to be two-panel, C18 doors altered to fit, and carried on earlier, forged, strap hinges. The west-end room has a stone fireplace, with a substantial timber bressemer, on the south side and a bridging beam with a stopped broad chamfer, which sits on a modern, brick pier at the north end. The joists are relatively light.

To the east of the modern brick screen noted above, the building is modern, erected in the 1970s, and there appears to be no fabric of earlier date in this section. Structural fabric dating from the 1970s is not of special interest.

On the first floor there is much more visible timber framing. The stairs rise to a landing from which access is gained to a bathroom along the south side of the house. It is not possible from the landing to go through to the modern extension, access to the first-floor of which is by a separate stair at the east end. The east end of the landing and bathroom marks the east end of the surviving historic fabric, and comprises a section of timber framing with a waney, angled brace. This framing adjoins the upper-floor section on the south side, which is visible externally at first-floor level but which is concealed internally by plasterwork. Together they form the south-east corner of the timber frame. The north wall of the frame at this level may survive intact. Certainly it is seen to be complete for the length of the west-end bedroom and extends part way along the landing to the top of the stairs. Substantial posts, with down-swinging braces, are pegged to the plate above. Towards the west end there appears to be a blocked window, with empty, square-set mortices in the sill, probably for mullions. The stud which forms the west jamb of the window appears to be bird-mouthed over the plate above, which may indicate a repair or that the windows was a secondary insertion. The wall plate is the only visible timber element of the west-wall, and it may be that the framing beneath it has been removed. A number of in-situ pegs, and the fact that this wall leans inwards so markedly, might, on the other hand, suggest it remains timber-framed, but in the roof it can been seen that the gable, at least, is of brick. A fireplace on the south side, above the main fireplace below and vented via the large south-side stack, remains open with a timber bressemer. It seems rather too neat to have survived unaltered. The ceiling in this room has been raised and the beams reordered.

Above is a C15 crown-post roof, three posts of which survive, one against the west wall. The post most clearly visible, roughly central, is octagonal with a moulded corbel from which braces rise to the collar purlin. The collar purlin, and its collars, survives largely intact, save for a lost section above the loft hatch. The rafters seem original, but two ranks of fairly crude side purlins, and the fact that the collars are neither braced nor appear to be set into the rafters, would indicate some reworking of the roof, which might be expected if the tie-beam level has been raised.

The line of Broad Street was probably determined by the east edge of the precinct of Ely Cathedral and the line of the outer bailey of a motte and bailey castle generally held to have stood in the cathedral close, at Cherry Hill. Evidence suggests that Broad Street has been substantially occupied since at least the C13, with industrial activity on what is now the site of the Jubilee Gardens, on Broad Street to the south of no. 23, since at least the C14 (Cambridgeshire HER). The location between the cathedral close and the river, crucial for the city's commercial activity, implies that the street had a relatively high status and one might expect therefore that buildings erected on the site of no. 23 Broad Street had owners of some significance. The modern street plan of Ely's historic core is not markedly different from the medieval plan. Speed's Map of 1610 shows Broad Street (then Flaxe Lane) built up on both sides, with the rear of the properties on the south side, in the area of no. 23 Broad Street, being laid to garden and open down to the river. An excavation in 2000 on the site of Jubilee Gardens, uncovered evidence of an aisled building close to the street front dating to the C12 and a boundary ditch or drain, perhaps relating to the cathedral grounds. Three large channels dating from the C14 or C15, ran from the river towards Broad Street. In addition there was evidence for industrial activities, particularly C16 and C17th pottery production and C17 tanning (Cambridgeshire HER). The Historic Ordnance Survey (OS) maps show that the land between Broad Street and the river was open in the C19, with no. 23 having an extensive garden and a pathway leading down to the Great Ouse.

No. 23 Broad Street was probably erected in the C15 but its original form is not clear. The remaining timber framing might imply that it was a two-storey dwelling on the street front, but the modest scale of the surviving fabric suggests that it could have been part of a larger property. The two-storey element perhaps formed the upper end of a hall house running back from the street towards the river, with the hall situated behind the surviving historic fabric, where the modern section of the house now stands. Alteration to the ceiling in the west room of the upper floor imply that its ceiling has been raised, but it would seem likely that originally this upper floor room was open to the roof and the crown-post above visible. The decorative element offered by the crown-post indicates that this was a high status room in the house. Given the geographical context, it is possible that the building had a domestic and commercial function, as it is thought was the case in the C14 for The Three Blackbirds, no. 41 Broad Street (Cambridgeshire HER). No. 23 Broad Street was listed in 1950 and the modern renovation and addition to the rear was done in the 1970s.

23 Broad Street, Ely, a timber-framed building originating in the C15 with later and modern alterations, is designated at Grade ll for the following principal reasons:

* Architectural Interest: the building contains significant remains of a timber-framed building originating in the C15;

* Interior: the surviving interior is of interest most notably for the timber-framing and panelled screen of the street-front room, as well as a significant proportion of a crown-post roof;

* Historic interest: the building gives an indication of the economic and social status of the buildings constructed on Broad Street in the C15;

* Group value: group value with several nationally designated assets on Broad Street; notably 41 and 41A Broad Street, a building of the C16-C17 listed at Grade ll*, and 'Cherry Hill' Castle Mound, which is a Scheduled Ancient Monument.