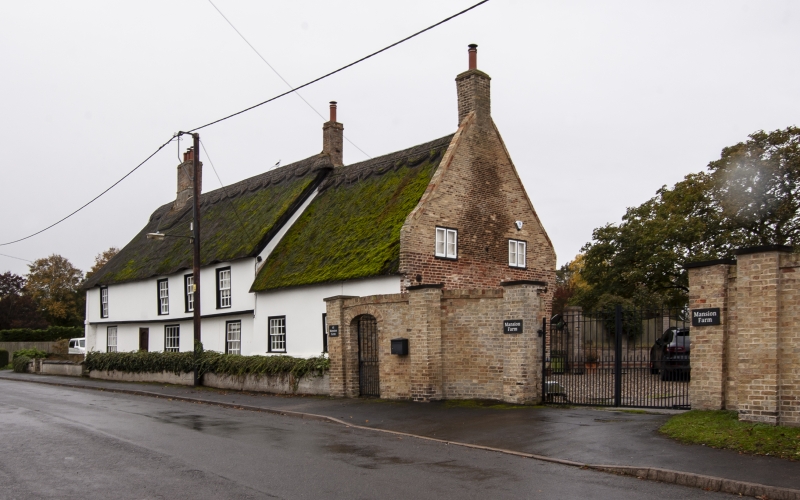 House. Late C16, with late C17 service addition to north end. Timber frame,
plaster rendered, on brick plinth with south gable end rebuilt in C18 in red
brick. Reed thatched roof hipped to south end and limestone ridge stack,
having red brick above the ridge. Single range five bay and lobby entry plan.
Two storeys with the first floor jettied on the front. Four first floor C19
twelve pane hung sashes, and a small casement to a closet opposite the stack,
now concealed by plaster. Jetty joists are concealed by a fascia and only one
bracket is visible at the north end. Two C19 sixteen pane ground floor hung
sashes and a twelve pane hung sash on either side of original doorway and
doorcase with hollow moulded architrave. Four centred arch in square head
with carved foliate motif to the spandrels. Door is composed of three
vertical planks with iron cover strips and frame with iron studding and
original fleur-de-lys strap hinges. The south gable end has red brick of
irregular bond but predominantly of three stretchers and two headers, on a
plinth. An original ground floor blocked window opening has stilted segmental
arch indicating an early-mid C18 date which is probably of similar period to
the staircase. The service wing is at the north end. Late C17. Timber
framed, plaster rendered on the front, brick painted rear wall, and red brick,
English bond on plinth to end wall. Rebuilt gable end above eaves in gault
brick when end stack added. Reed thatched roof with parapet gable on moulded
brick kneelers. The moulded brick of the kneelers is late C17. One storey
and attic. Two windows on the front. Strict Baptist chapel adjoining at the
south west. C19 gault brick, now covered in asbestos. Two recessed hung
sashes in the north wall. Interior fittings removed. In front and to the
road is a chapel yard associated with the chapel. Two coffin tombs and a head
and footstone, all C19. Interior: The principal trusses of the timber
framing are exposed. Jowled heads similar to that of Manor Farmhouse (qv)
with cambered tie beams and shallow bracing, some of which have been cut. The
house has always been of two storeys but the ceilings at first floor are
probably insertions. There is a middle rail in the wall frame on which is
lodged the ends of the ceiling joists of the ground floor rooms. The framing
is of substantial scantling. Original partition walls exist in whole or in
part. In plan there is a central two bay hall entered from the lobby entry
and a single bay parlour at the south end. At the north end there is an
original partition wall between the hall and a further ground floor room
which, though in the location for a service room, has moulded main beams and
posts indicating family or guest use. Ground floor, north room, has leaf stop
chamfered main beam carried on prick posts in the north end wall and the
partition wall between this room and the two-bay hall. The capitals of the
posts are carved with groove and scallop mouldings to the soffit. The hall
has boxed intersecting main beams and original joists similar to those the
parlour. The main beam is carried on prick posts in the east and west walls
with similar enrichment of scallop carving and a roll moulding as in the
adjoining room. In the middle rail in the east wall is a short tabled scarf
joint. Above the inglenook, now blocked, there is a carved pad to support the
axial main beam. An original doorway and plank door with fleur-de-lys iron
strap hinges leads to the lobby entry. The parlour has an exposed inglenook
hearth of limestone, which has had the rear wall and part of the side walls
repaired. The surround, however, is original. There is a shallow ogee
moulding on a high base with a jewel stop. The hearth lintel is of wood and
the ogee moulding is carried round from the jambs. The ceiling is exposed and
has a similar leaf stop chamfer to the main beam and similar but smaller
moulding to the exposed ceiling joists which are laid flat. In the early C18
a staircase was inserted into the hall. The newels are square, fluted, and
there is a toads back rail. The balusters alternate. One is formed of two
symmetrical columns, and the other is of column-on-vase type with the column
enriched. At first floor there are abutting fireplaces to the chamber above
the hall and the parlour. They are of similar limestone but are now blocked.
An original plank door with fleur-de-lys strap hinges leads to the closet
above the lobby entry. The roof is of side purlin type. The service wing has
a new roof. A leaded light casement is in the north gable end of the main
range and is now internal. The manor was vested in the prior and convent of
Ely but the long tenure of the Lisle family and their successors the Scrope
family of Bolton, Yorks, suggests that it was regarded differently from other
manors held of the prior and convent. The 5/- annual rent was not enforced
from the tenant. It is thought that the Mansion House is the successor of the
medieval manor house. In 1563 the tenancy of the manor was sold to Symeon
Steward and held in that family until 1649 when it passed to Thomas Allen. In
the C18 the house was owned by Robert Drake of Cambridge.