A Grade I Listed Building in Coveney, Cambridgeshire 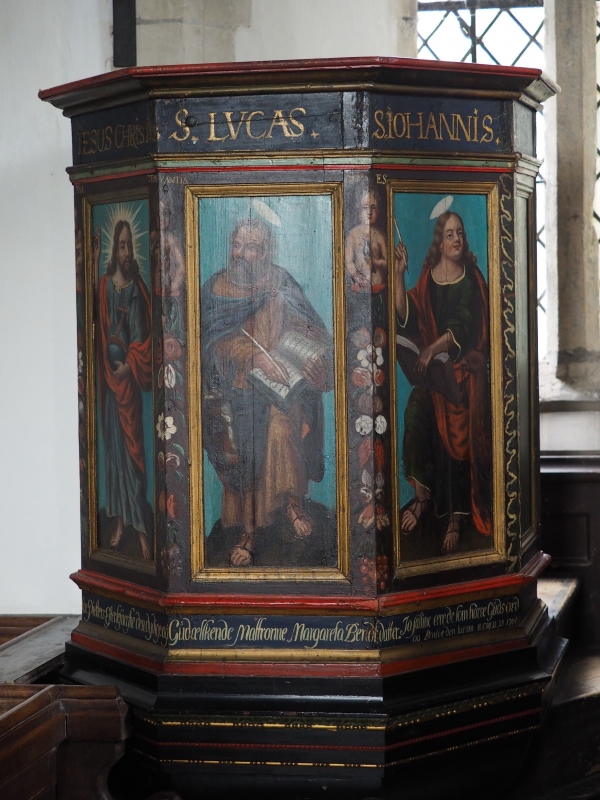 Parish church. C13 nave and chancel and C14 west tower. 1896 restoration.
Field and rubblestone and limestone dressings. Continuous nave and chancel
roof, originally thatched and plain tiled from 1896. End parapet and C19
gable cross. Plan of west tower, aisleless nave and chancel with south porch
and C19 north vestry. West tower of three stages. Two lower stages are C14
with C15 upper stage. Embattled parapet with low pyramidal tiled cap to tower
roof. Ground stage open on north and south sides to form a passage. Two
centred arch of two wave moulded orders and a hollow moulding to each face of
the arch. West doorway has two centred arch of two chamfered orders. First
stage south wall has lancet window in two centred arch with two hollow
mouldings. The C15 bell stage has two cinequefoil openings to each side.
Nave has three C14 windows in two centred arches with reticulated tracery.
The south doorway has a two centred arch of three chamfered orders. The
centre chamfer terminates in a broach stop and is carried on angle shafts
which have been removed. There is a label with stops. The door is of
vertical planks with cover strips. The south porch has the date 1896 to the
gable but the walls are possibly older. They are rendered and have a high
plinth. Square heads to single light windows in each side. The S wall has a
C13 lancet and two cinquefoil windows and the east wall a restored
three-light C14 window with reticulated tracery. The north wall has coupled
lancets (see St Martins, Witcham) and two C13 lancets. C13 north doorway with
a two centred arch of two chamfered orders. Interior: above the west doorway
in the nave is a C13 lancet window with deep rear splay. The roof is C19 and
of seven bays and of collar rafter type. The piscina has two centred arch
with cinquefoil cusping. The roof above the sanctuary has C19 painted
boarding, and there-are patterned floor tiles. The reredos is German and C16.
Wood, carved in high relief and painted. In three bays divided by fluted
columns on brackets with end console brackets. Centre panel: the Crucifixion;
flanked on the left by the Flagellation and Mount of Olives and on the right
by Christ before Pilate and Christ carrying the Cross. Above a panel
depicting the Resurrection with strapwork decoration. The pulpit is Danish.
1706. On modern base. Wood, painted. Octagonal with pane depicting Christ
and the Evangelists. Pews in nave. C16. Original bench ends with poppy
head finials and typical heads in profile, Instruments of Christ's Passion,
keys, arms of the Scrope family, an eagle, a triskele etc. Chandelier C18
Dutch. Brass. Central shaft of baluster turnings with ball pendant finial.
In three tiers with six branches to the lower tier. C13 wall paintings on
south wall.