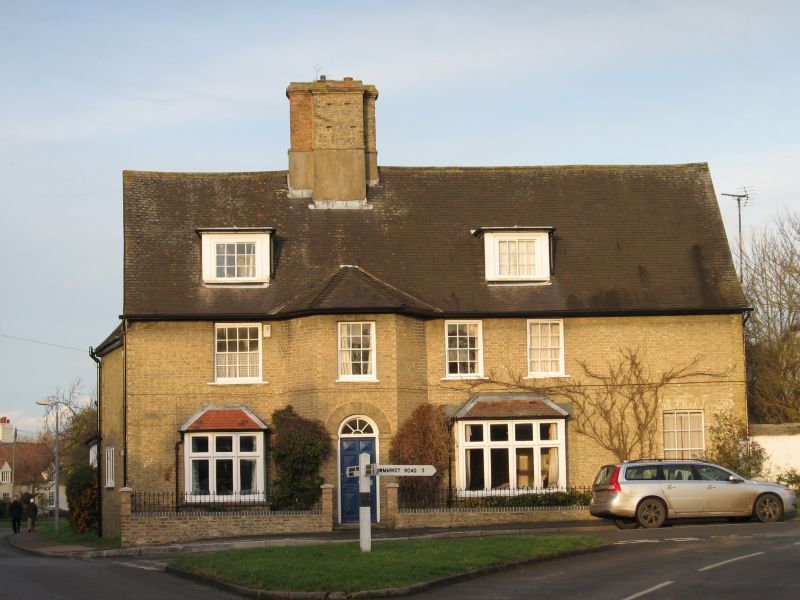 Manor house built probably in the early-mid C16 but altered and
extended in C16 and C17 and the facade and gable end cased in
yellow brick in C19. Timber-framed, with front wall and gable
ends cased in gault brick. Steeply pitched, cement tile roofs
with rebuilt ridge stack. The oldest part of the house is the
range in Quarry Lane. This is a fine early-mid C16 hall house,
floored throughout, with a single bay service end to the right
hand. There was possibly a cross-passage between the hall and
service bays which was sealed when the house was converted to
one of lobby-entry plan later in the century. There may have
been a parlour wing or bay at the left hand but no evidence
survives in the wall or roof structure to confirm this. Two
storeys and attic. Front elevation has two C20 dormers and
three C19 recessed hung sashes. The principal doorway is to a
two storey, C19, brick porch on the site of the lobby entry.
Hung sash at first floor above doorway with round headed arch.
The rear elevation has exposed framing with middle rails, close
studding of substantial scantling and fine serpentine bracing,
in the hall at first floor. The fenestration is all C19 or C20
but one window to the first floor is probably on the site of the
original hall window. At ground floor a doorway at the low end
of the hall, now blocked may well be on the site of one of the
opposing doorways to the cross-passage. The range to the High
Street is in two bays and is also timber-framed, but C17 with a
C19 yellow brick to the road front and render to the rear. The
roof ridge is at a lower height. Cement tiled. Two storeys and
attic. The fenestration is also C19. Adjoining this range is a
lower building, probably early C19, of clunch with a framed rear
wall. Part has now been converted for domestic us but
originally may well have been a stable or other farm building.
Inside. The service end of the early-mid C16 house is intact.
There are two service doorways, one with its original lintel.
the framing in this partition wall and in the gable is visible.
Each wall has a centre post, continuous from sill to tie beam
and the one in the end wall has curved downward bracing from the
centre post to the sill. This service bay is cellared. The
hall has quartered ceiling and boxed beams but otherwise no
features of interest which are visible. The roof is of crown
post construction and the original rafters, each pair with its
collar are intact, but the crown posts have either been removed
or are concealed. No smoke blackening was seen.