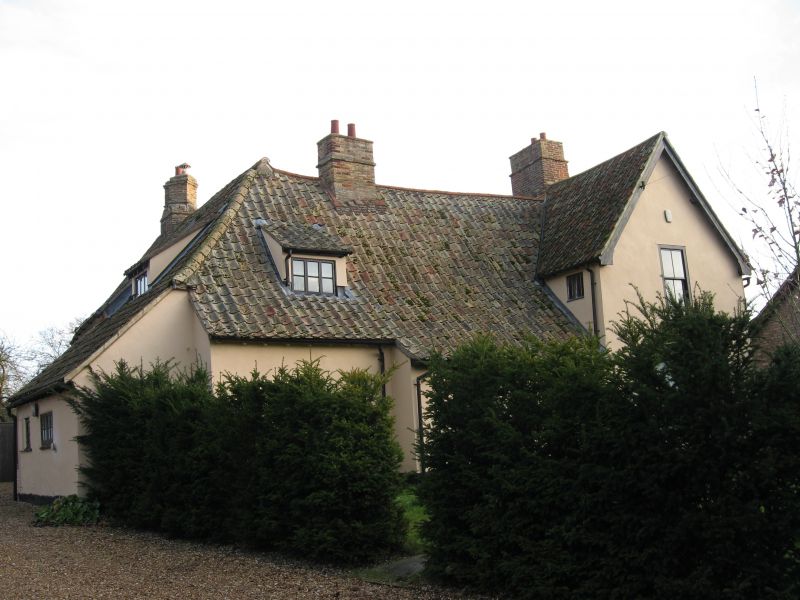 House of three building periods, including the original open
hall, C14-C15, now with stack and floor inserted, mid-late C16
parlour cross-wing and C17 kitchen wing at the rear.
Timber-frame and clunch. Tiled and pantiled roofs. Open hall,
timber-framed, rendered with a steeply pitched pantiled roof,
hipped to the North. The ridge stack is of narrow, red and
yellow bricks. One storey and attic. One dormer. The
fenestration and a lean-to addition at the front are all C20.
The parlour cross-wing, to the South, is also timber-framed
rendered with a steeply pitched tiled roof and a ridge stack.
Two storeys. There are two C20 windows to the gable end of the
cross-wing. The early C17 wing is of clunch but the upper half
of the gable end Is of narrow, gault brick. The roof is tiled
and has an original gable end parapet on kneelers. The end
stack has grouped shafts set diagonally, also early C17.
Inside, the open hall is of two bays and three trusses, of which
the display truss over the hall has survived. The tie beams are
cambered and the principal posts have thickened heads and
mortices for arch braces from the posts to the tie beams. The
rear wall is intact and there is a straight brace from the post
to the wall plate. The roof is of crown-post construction which
was partly mutilated when the stack was inserted. The crown
post is of "columnar" type with a square base, torus, chamfered
corners, astragal and bell shaped capital. There are short,
curved braces to the collar purlin and the collar. A
substantial number of rafters have survived. They are of
lighter scantling and less carpentered than those of the
crosswing which are late C16. The whole of the roof and the tie
beam are sooted. The side purlin roof over the service bay has
been constructed with timber re-used from the original
crown-post roof. The parlour wing is a particularly good
example. It is in four bays, and the timber-framing is exposed
internally showing close studding of substantial scantling. The
principal posts have jowled heads and the tie beams are
cambered. There are serpentine braces in the side walls similar
to those in the rear wall of Mitchell Hall (g.v.). All except
one room at first floor, have original ceiling beams with
moulded joists and main beams. At ground floor the ceiling of
the rear room is intersecting main beams, and these and the
joists have five ovolo moulding. The other rooms, including
those at first floor, have stop chamfered beams. The stack is
of red brick casing to a clunch core. There is an inglenook
hearth at the rear with openings for a spice cupboard and a
bread oven. The room at the front has a fireplace surround of
clunch with a four centred moulded arch on a high base, in a
square head. At first floor there is a similar fireplace
surround with shaped base stop. There are two original doorway
openings in the wing and four ovolo mullion windows with iron
standard bars. One window to a closet at the side of the stack
has a later window of diamond leaded lights set into the
original opening. The ground floor room at the front has traces
of original red paint to the studs. The roof is of clasped
through public construction with paired wind bracing between the
principals and the purlin. The early C17 kitchen wing has an
inglenook hearth.