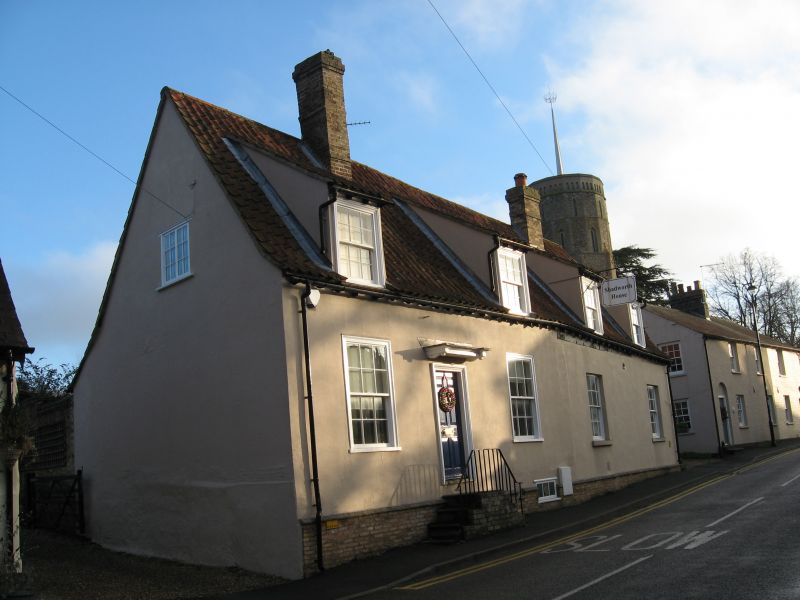 Cottage, possibly an open-hall with the stack and floor inserted
in early-mid C16. In C18 the cottage was subdivided and a side
stack added at the rear. Restored c1977 but retaining some of
the original features including inglenook hearths, moulded beams
and part of a partition wall. Timber-framed on brick or clunch
sill with red pantiled roof, raised at rear. Internal stacks of
C19 grey brick. At the right hand there is a gablet and a
hipped roof over what was originally a shop. One storey and
attics. Four C20 cat-slide dormers. Short flight of steps with
C19 iron railing leads up to doorway flanked by two windows, one
bowed and early C19. Two other windows include one similar
bowed window. Inside. The centre bay has a ceiling with hollow
and roll moulding to a main beam. Several joists and middle
rail forming a cornice. The other joists are replacements. A
partition wall between the centre bay and an end bay has exposed
framing and suggests that this wall is earlier in date to the
floor frame. There is a continuous centre post in the hall.
The construction is similar to that of Well House, Swaffham
Bulbeck also possibly an open-hall.