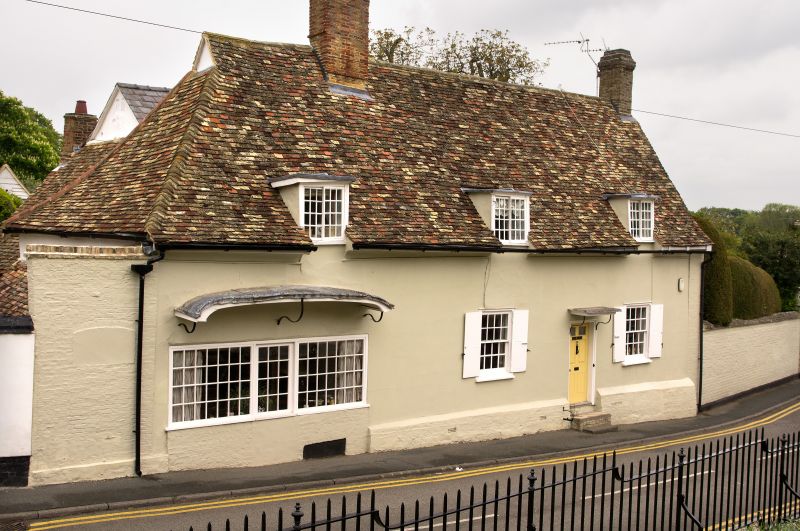 House, probably early C16 but possibly an open-hall. Later
alterations include the addition of a shop to the South end and
a service wing at the rear. The house was extended again in the
C19. Timber-frame on brick sill with plaster rendered walls.
Gable ends rebuilt in brick. Plain tile gable roofs, hipped to
South with a gablet. Coved eaves and early C18 ridge stack of
yellow brick with red brick quoins and string-course. End stack
is C19. Plan of three bays with a cross-passage at low end of
hall. One storey and attics. Three flat roof dormers each with
C18-C19 horizontal sliding sashes with small panes. The house
doorway is possibly on the site of the entry to the
cross-passage. It has an early C19 flat hood and a panelled
door. There is a C19 bootscraper attached to the brick sill at
the side of the door. On either side of the doorway are two
late C18 or early C19 hung sashes of sixteen panes each with
early C19 panelled shutters. The early C19 double fronted shop
has an elliptical hood of lead. The single room kitchen wing is
also timber-framed but of lighter scantling. Two storeys with a
plain tiled roof. Inside the house has hollow and roll moulded
main beams in the hall floor frame and the sites for two diamond
mullion windows.