A Grade I Listed Building in Swaffham Prior, Cambridgeshire 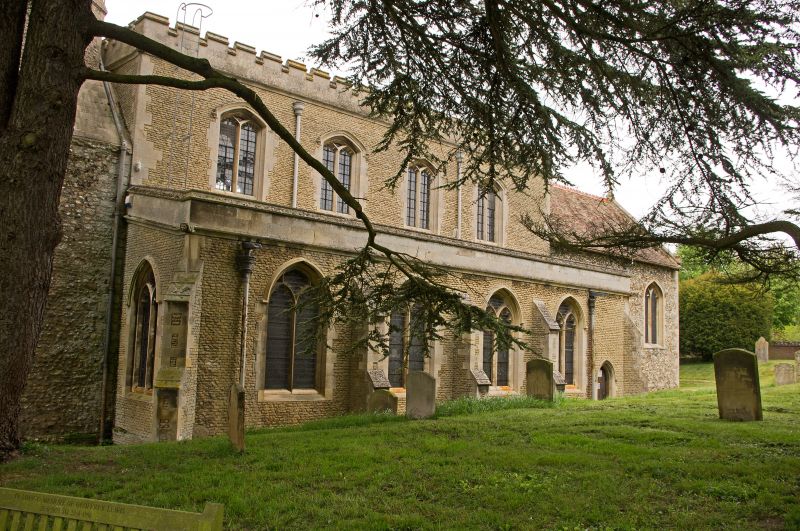 Parish church, of West porch, West Tower, Nave, North and South
aisles and chancel. St Mary's has a particularly fine west
tower, mainly late C12 and early C13, but the West wall of the
nave and parts of the chancel are c1100 and survive from the
Norman church on the site. The nave, aisles, West porch are all
C15 and the exterior was heavily restored in 1878 by Arthur
Blomfield. West porch, C15, of clunch, badly worn, with rebuilt
gable roof. West tower has a rectangular ground stage, late
C12, and the upper two are sixteen sided and early C13. Rubble,
pebble and flint with limestone dressings on a chamfered
plinth. The blocked parapet is modern. Bands between stages
and a cornice of billet moulding to the upper edge of the ground
stage. The ground and first floors have late C12 fenestration
including in the first stage round headed arches of two orders,
the inner plain and the outer roll moulded on attached shafts
with cushion capitals, reeded, to a window in each wall. The
second stage has in each alternate side a double chamfered
lancet. The third stage has a lancet to each side with only one
chamfered order. Externally the nave and chancel including the
fenestration and doorways date from 1878. However there is a
badly worn North doorway of clunch, probably C15. Inside. The
West tower was built against the West wall of the c1100 church
and the round-headed tower arch with its roll moulding dates
from late C12. The nave is C15 and in four bays of two centred
arches of two moulded orders with the inner on attached shafts
with moulded and embattled capitals. The clerestory is also C15
and of four windows to each side, each of two cinquefoil lights
in four centred head. The roof has been restored but the
jackposts are carried on original C15 embattled pilasters. The
chancel arch has been rebuilt, but has a C15 rood loft opening,
part repaired, on the South side and a squint opening in the
North from the original North chapel to the chancel. Parts of
the chancel wall are c1100 but all the fenestration has been
removed. On the North and South walls are two blocked openings
of windows of C12. The brasses and monuments in the floor in
the nave have been removed and placed in the walls of the North
and South aisles. The brasses are mostly C15 and C16, but there
is one to Robert Chambers, 1638. The glazing is C19 and C20.
In the South aisle principally to the Allix family and in the
North aisle World War II and II War Memorials. The font bowl is
C13 but the stem and base are modern. One of two medieval
churches in the village sharing the same churchyard. The two
parishes were amalgamated in 1667.