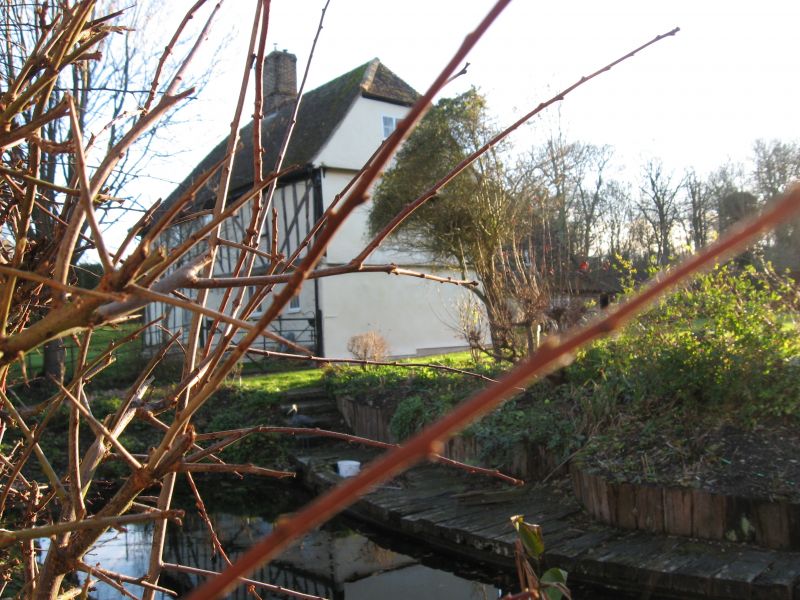 Farmhouse, probably mid-late C17. The ground floor of the rear
range may be part of an earlier house of C16, which had a first
floor rebuilt or added in late C17 or early C18. Timber-frame,
exposed, with hipped roof of original diaper pattern tiles, part
repaired, and a ridge stack of mainly gault brick with some red
brick and a string course. Original plan of single range of
three structural bays and a fire bay with stair turret at rear,
now incorporated in a C19 lean-to. Original three bay, lobby
entry plan. Two storeys. Six windows at first floor, including
one small C20 window on the site of an original closet window
opposite the stack and two original C17 cross-frame, iron
casements with stay bars and turnil fastening, but with C20
leaded lights. Three C20 windows at ground floor and an
original doorway with C18 door of six raised and fielded
panels. The end walls have bracing at first floor. The rear
range has a clunch ground floor and framed first floor, with a
cement tile, half hipped roof. Two storeys. The windows and
doorways are all later insertions. Inside. The original range
has many late C17 features including doors of two panels and
flat section twisted balusters to ventilation openings above
spice cupboard doors and to parlour doorway. The hall has a
large inglenook, mostly of pink or red brick and there are
smaller hearths to the parlour and a first floor chamber over
the parlour. The roof is of staggered, butt purlin construction
with collars between the principal rafters. The addition has a
large inglenook hearth and main beam and joists of substantial
scantling. The joists are laid flat. This floor frame either
incorporates re-used material or is part of an earlier building
on the site. On a former moated site.