A Grade I Listed Building in Waterbeach, Cambridgeshire 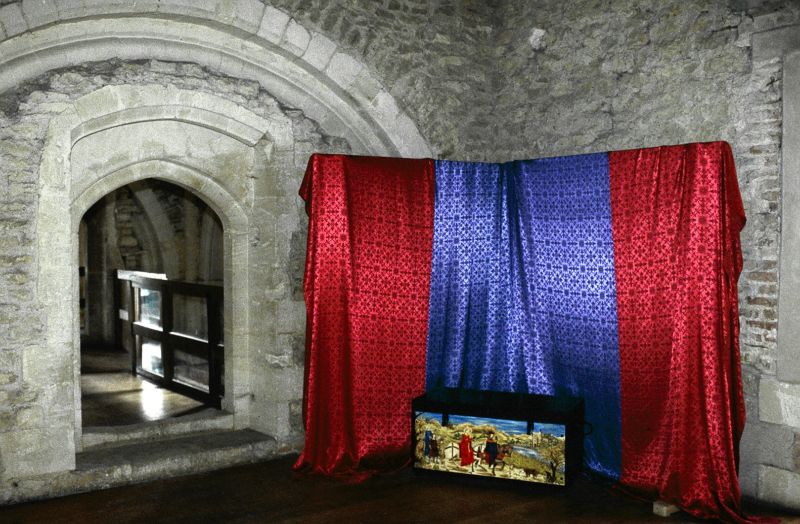 Benedictine abbey church remains c.1150; later C12 and C13
additions by Knights Templars. Converted to Franciscan nunnery
in C14 by the Countess of Pembroke (d.1377), and farmhouse after
the Dissolution with further C18 and C19 alterations. Between
1947-1977 the partitions of the farmhouse were mostly removed by
the MPBW and later the DoE; excavations within the building
revealed the late C12 south aisle. Barnack and ashlar limestone
with limestone rubble; C16 red brick and brick repairs, C19
gault brick eaves cornice, walls originally plastered. Plain
tile roofs. Two storeys (originally three), each facade with
blocked openings and inserted C18 and C19 windows, some retained
and replaced, others recently blocked and plastered. The east
facade shows clearly the blocked chancel arch and ambulatory
arches of the original church superimposed to the north by the
attached shafts of the C14 church of the Franciscan nuns
demolished at the Dissolution. Interior. The nave and
transepts of the original cruciform church survive to eaves
height with the addition of one bay and a south aisle and
clerestorey by the Knights Templars c.1170, the clerestorey
windows are now blocked or partly uncovered. The south aisle
was demolished for the later C13 Templar infirmary which
included a small C13 room to the south west. The fine
scissor-braced roof is partly restored. Alterations to the
church and infirmary c.1342 when converted to the domestic
quarters of the Countess of Pembroke and the Franciscan nuns
included the demolition of the C12 chancel, the insertion of a
first floor and stair cases, the blocking of the C12 crossing
arches, new openings at both floor levels, and chimneys. In the
C16 the gable wall of the south transept was rebuilt in red
brick with a large stack and hearths at both floor levels. Main
building excluding infirmary reroofed c.1773. Displayed in the
building are medieval floor tiles and carved stone details. The
building is Crown Property and is a scheduled Ancient Monument.
Masters, R. History of Waterbeach p. 38, 1
Clay, W.K. History of Waterbeach p. 84 1859
Hodgson, J.F. Arch. Vol. 42, p. 240, 1885
Barnard, L.A.B., P.C.A.S. Vol, 29, p. 72 1927
V.C.H. II p. 259-262 1948
Spittle, S.D.T. Arch. J. Vol, 124, 1967
DoE leaflet, Denny Abbey 1977
Ravensdale, J.R. Liable to Flood, P,142 1974