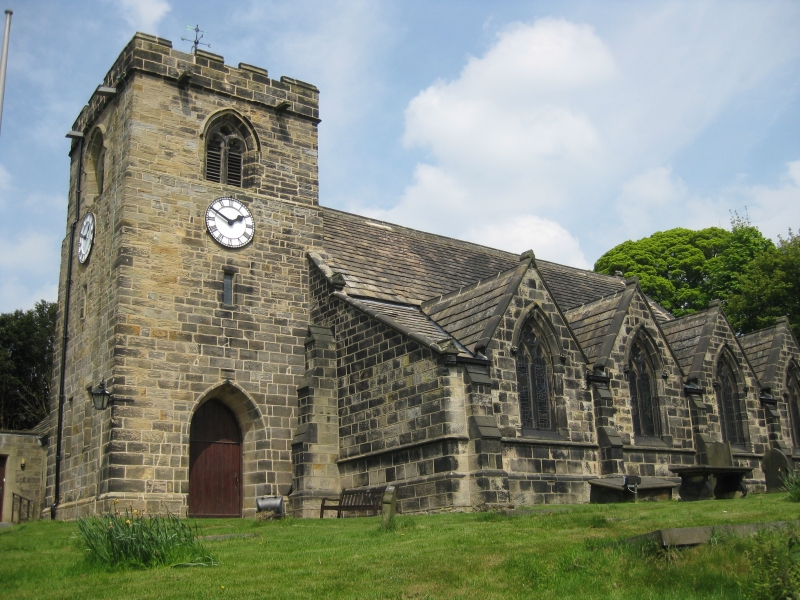 Church. Tower dated 1706 (but possibly earlier); otherwise late C19. Coursed squared sandstone (tower), and punched dressed blocks, stone slate roof. West tower, nave with south aisle, chancel. Square unbuttressed three-stage tower, with chamfered plinth, has on south side a large two-centred arched and deeply-chamfered doorway with square headed plank door, a datestone over the apex with raised lettering " TL 1706", a narrow rectangular window to the second stage, a large clockface above this, and set-back third stage with two-centred-arched double-chamfered belfry window of two cusped louvred lights, under a hoodmould, a drip-mould with two gargoyles, and embattled parapet concealing a low pyramidal roof with weathervane; west side has two recessed round-headed windows with hollow spandrels and chamfered square-headed surrounds, but is otherwise similar. Buttressed full-height four-bay aisle has four cross-gables containing two-centred-arched windows of two cusped lights with multifoils in the heads. North side of nave has similar windows. Chancel has a three-light east window with two quatrefoils and a trefoil in the head.