A Grade I Listed Building in Lanreath, Cornwall 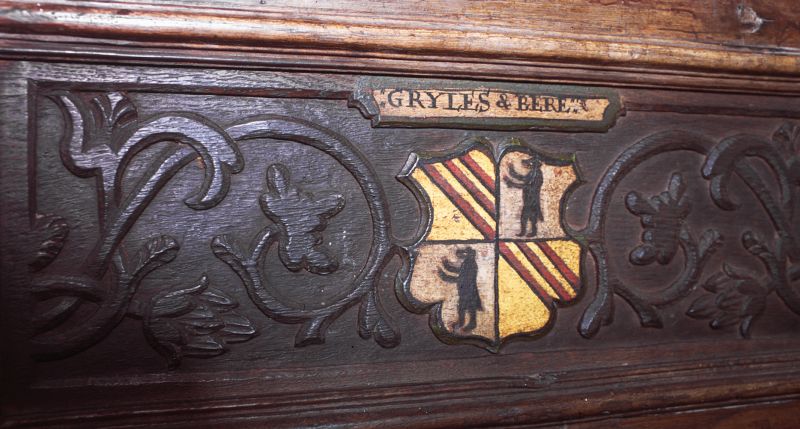 Norman carved font of Catacleuse stone. Cup shaped bowl decorated with
palmettes on round base with platted rope band around waist. Elaborate zig-zag
decoration on base. Carved oak cover, C17. Octagonal and decorated with carved
renaissance stylised foliage.
Monuments; on south wall of chancel monument to Charles Gryles died 1611 and
wife and eight sons and daughters. Erected by John Gryles in 1623. Painted timber
imitating stonework. Base with atlantes at corners. Kneeling figures of Charles
Gryles and wife above flanking inscription and heraldic arms. Corinthian capitals
supporting entablature with heraldic arms, cherubs and cartouches.
Monument on south wall of Lady Chapel above south door. Recently repainted.
In memory of John Gryles, died 1649 and Lady Grace his wide, died 1653. Erected in
1666 and repaired in 1794. Inscription around frame and in roundels. Heraldic arms
in centre surmounted by hedgehog.
Commandments, Creed and Lord's Prayer on painted boards in chancel. Letter
from Charles Rex to Cornish on south aisle. Painted Royal arms, 1660 CR. On board
on north wall of nave painted board with Prince of Wales feathers and inscription
16 35 ich dien
C P.
Glass in chancel north window erected in 1884 in memory of Rector Richard
Buller.
Font recorded in F A Paley Illustrations of Baptismal Fonts 1844.
C Henderson The Cornish Church Guide, 1925 rp.1964
Kellys Directory of Cornwall, 1889.
N Pevsner and E Radcliffe The Buildings of England, Cornwall 2nd edition 1970.