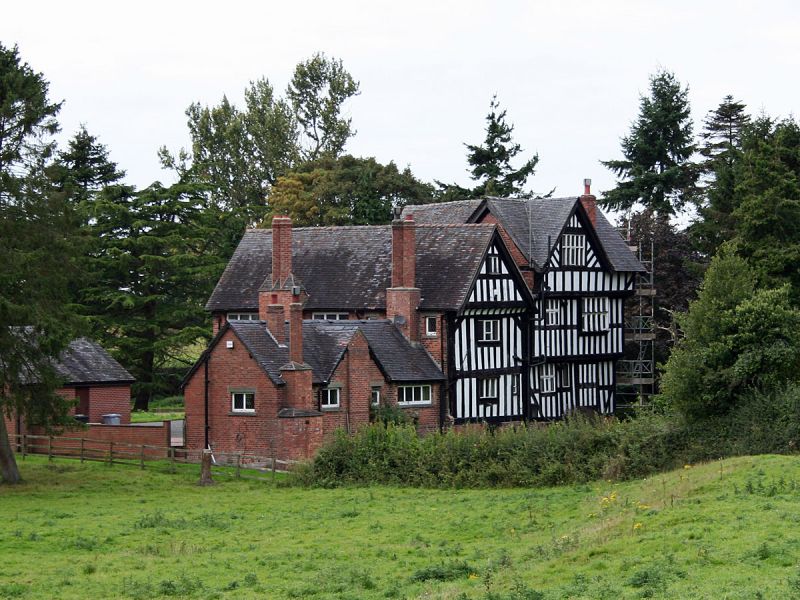 House, C16 with C19 and C20 additions. Timber framed with rendered
infill and brick,and with a plain tile roof. Two storeys with attic
and basement. T-shaped plan with later additions. Eastern side: of
three builds. At left is a Cl9 and C20 single storey service wing of
brick. To the right of this is the oldest part of the front, a single
gabled bay with a brick basement with one ashlar surrounded window.
Close-studded walling to ground floor which has a 3-light mullioned
window with a transom and a similar arrangement to the first floor
with angle braces. The jettying of the gable is coved and there is a
2-light attic window. To the right of this is a later C16 portion with
close studding to the ground floor with tension braces and a middle
rail above a brick basement. To the centre is the flush brickwork of
a superimposed chimney of the C18 or C19 painted in simulation of
timber framing. The first floor is jettied and supported on moulded
brackets with a moulded bressumer. To the centre is a projecting
5-light window, the central 3-lights blocked by a continuation of the
chimney. The attic is jettied and has similarly moulded brackets and
bressumer to those seen at ground floor level. There is a 5-light
window set in a gable at left which has chevron strutting. The right
hand side (entrance front) has a gabled wing at left having close
studding with a middle rail and tension braces to the ground floor with
a 5-light mullioned window which has a transom. Jettied first floor
with moulded bressumer and brackets. Similar middle-railed
close-studding to the first floor and central 5-light window. Jettied
gable above with moulded bressumer and chevron strutting to the lower
panels and to either side of the tall 5-light mullioned and transomed
window. To the right of this in the re-entrant angle with the southern
wing is a brick 2-storey C19 addition. Porch doorway to the right hand
side of this addition. The south face has a substantial Cl9 and C20
2-storey addition masking the lower body of the C16 building, but the
jettied attic gable appears at right with a central 5-light window of
which the lateral lights are now blocked and which has chevron
strutting to either side.
Interior Chamfered ceiling beams to ground floor rooms and one
internal wall showing small framing and a 4-centred bressumer.
The plan of the house appears to have developed from a rectangular
gabled block at the north east in which an L-shaped block was added
thus forming the T-shaped building to which additions were made in the
C19 and C20. Much of the timber on the northern side appears to have
been renewed but that on the western and southern gabled wings
(including the southern attic window) appears original.