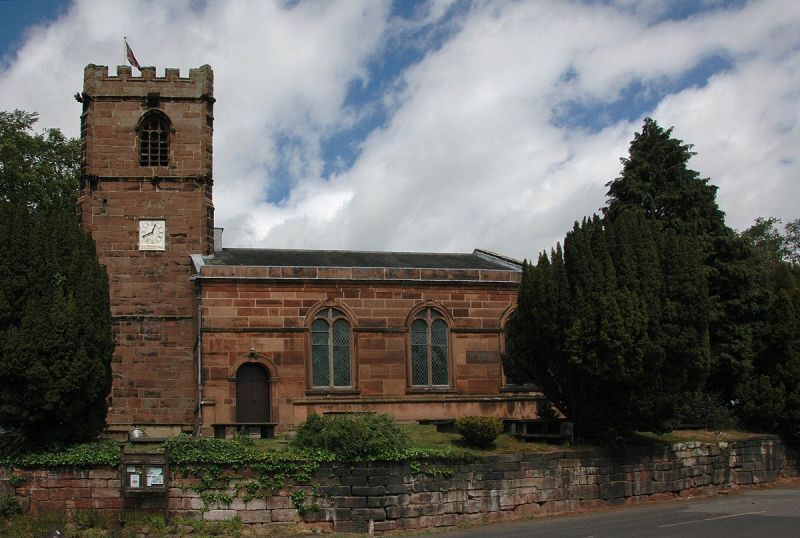 LITTLE BUDWORTH C.P. THE VILLAGE
SJ 56 NE
3/60 Church of St. Peter.
3.1.67
GV II*
Church. Perpendicular C15 tower with nave and chancel dated by
inscription "Rebuilt 1800" in a composite style. Red sandstone
ashlar with slate roof. Western tower, nave and chancel. Tower of 3
stages: western front: projecting plinth with moulded top. Diagonal
buttresses. Central doorway with moulded surround and hood mould with
worn figurehead label stops. C18 door with 8 raised and fielded
panels. String course above at level of sill of window to first stage
which has a roll and casement moulded surround and renewed glazing
bars of c1800 with 3 round-headed arched lights. String course at
level of springing of arch continuing around tower and across
buttresses and set with a series of figure and animal heads. Canopied
niche above this and string course below belfry opening which is
louvred and of 3 lights and showing fenestration of c1800. String
course above with gargoyles to angles and centre. Battlemented
parapet above with chamfered machicolations. South front: blind
save for string courses, staircase lancets at left and belfry openings
and parapet as on west face; also having clock face at level of niche
on west face. Square plate with circular face and dated 1785 to
corners and inscription Simon Faulkner ) Ch Wardens below.
William Mafon )
North face: blind save for string courses and C20 lean-to to base.
Nave: South face; 4 bays. Projecting plinth with moulded top. Door
at left with round arch, triple keystone and raised springers. Three
windows to right of two arched lights within round-arched surround
each with triple keystones and band at level of springing.
Cyma-moulded cornice. North face similar but having 4 windows and no
door and lacking keystones and impost band. Window at left without
glazing bars.
East end: Chancel to centre with triple-light round-arched window and
acanthus leaf decoration to keystone. Blank left and right hand
reveals to chancel. Doorway at left to Eastern wall of nave has
moulded surround and pineapple finial in relief.
Interior: pointed tower arch at western end in ashlar walling, and
with angled buttresses at sides. Cambered barrel vault to nave.
Moulded Gothick surrounds to the windows. Semi-circular barrel vault
to the chancel. Tablet to right hand wall of chancel recording the
gift of £1,000 in 1798 to rebuild the church by Ralph Rinkham, a
Manchester merchant. C18 pulpit raised on four square legs and
standing on square base with raised and fielded panels and fluted 1/4
columns to the corners. C17 font with gadrooned and fluted marble
body of punch-bowl shape standing on octagonal sandstone base painted
in simulation of marble.