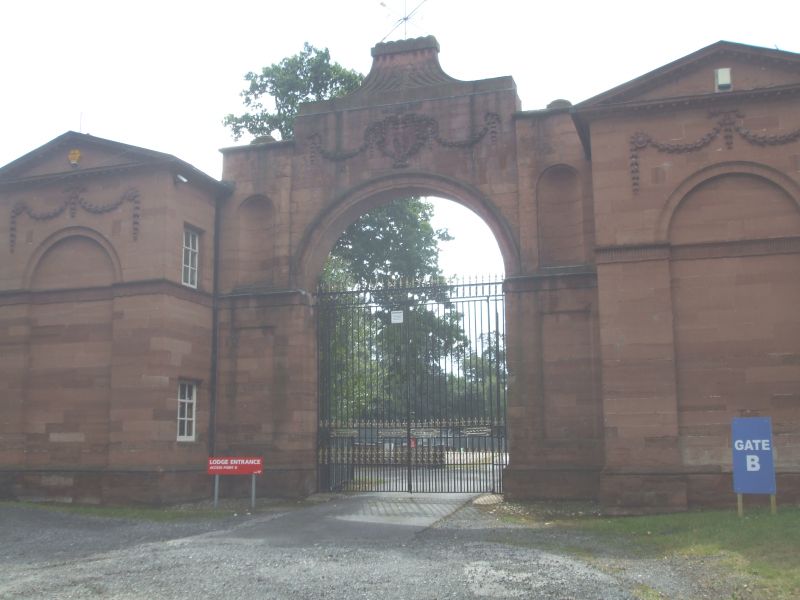 LITTLE BUDWORTH C.P. OULTON PARK
SJ 56 NE
3/50 Screen, lodges and gates
at Oulton Park
3.1.67 [Formerly listed as Lodge
Gate,Oulton Park (2 cottages)]
GV II*
Screen, lodges and gates. Circa 1775 by Joseph Turner. Whitewashed red
sandstone ashlar. Central screen wall with gateway and lateral two
storey lodges with single storey wings at left and right. Road front:
moulded plinth. Central screen with round arch to centre having hood
mould. To either side are lower rectangular sunken panels. Moulded
band at level of springing of central arch and arched niches above
this. Central armigerous shield over arch with Rococ surround and
swags to either side. Flat coping to screen with central ramped
surmount with fanned flutings and central extended acanthus leaf
tongue and six flattened balls to top bearing three crossed metal
arrows. To either side of this screen are projecting lodges with
pedimental gables and central blind round-arched recesses, with a
moulded band at the level of their springing continuing across from
the screen. Swags draped around paterae above this and shallow
pedimental gables with modillion cornice. To either side are slightly
recessed wings with two blank rectangular sunken panels to each side
and modillion cornice at eaves level. Central C18 gates with round
arched top and band of rounded decoration to lower half.
Rear: Similar save that screen wall has rectangular sunken panels to
upper lateral walls. Pedimentally gabled lodges have windows of 3 x 3
panes to the ground and first floors and the recessed wings have 3
rectangular sunken panels each, the central ones containing windows of
3 x 3 panes.