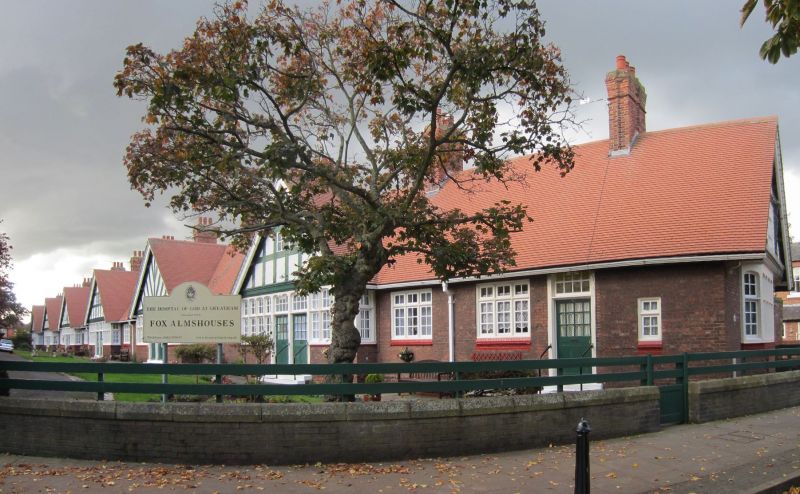 GV
II
Built by Mr Fox in 1897 opposite his brewery in Smirke's Yard. A neat row of 13 cottages with large gables breaking forward slightly. Brick with high tiled roofs and 12 tall chimneys with spurs on each side. Paired doorways in the centre of each gable with shaped lights above; 4-light wooden transom and mullion windows on each side with Tudor arch heads. The gables are half-timbered with an alternative rectangular and diagonal patterns (the former being small attic lights) and bargeboards. At the East end, to the street, is No 67 which is treated as a continuation of the almshouses in similar style. No gable to South but a single door with a small window to the right. Half-timbered gable to street has bargeboard and is jettied and supported on a shallow 6-light bay and end brackets. A tablet in the gable, set in a Strapwork panes, flanked by female herms, states "The Fox Alms House 1897. Built and endowed by Henry Fox of Norton". The former Meeting Room (No 14) is on the South side of the garden opposite Nos 5 and 6. Single storey in similar style. Projecting gabled centre with an 8-light window, (2 of these lights being a doorway with shaped lights above). Five-light bays to East and West supporting jettied gable ends. Brick with tiled roof and Spurred chimney. Offices and walls to rear alley also included