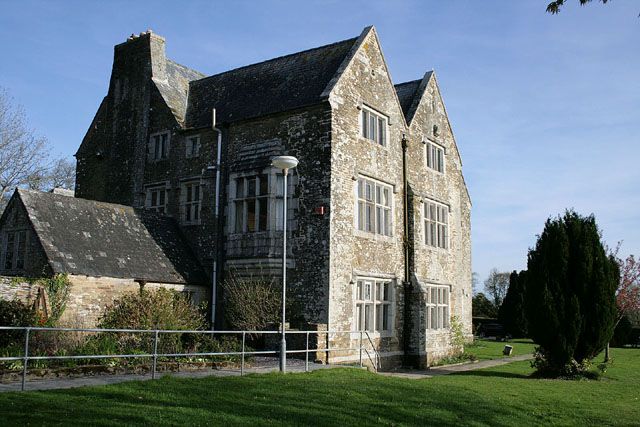 27.8.52
II*
Remains of mansion, now used for holiday accommodation and entertainment. Present structure has circa late C13 origins in the north western stair turret. The entrance tower and hall (later remodelled) probably date from the 1450s, for the Bonville family. The west range, circa 1700 with part remodelling of earlier fabric. Early photographs illustrate similar ranges to the east and south. Documents record a fire in circa 1750 when Edward Trelawny erected a new south east wing. In 1860-1862 J.P. St Aubyn was responsible for much rebuilding for Sir John Trelawny. This included the rebuilding of the chapel on the northeast, the south front and the refronting of part of the north elevation.

Plan complicated with much C19 rebuilding. North range comprises a large entrance tower with stair turret and wide through passage leading to a wide passage between the hall and chapel. Although set further back from front elevation, the C19 chapel retains its original relationship with the hall and passage. Entrance on east side of passage to chapel and on west side to the hall, later the drawing room. Stair turret at outer north west corner of hall although now bearing little relationship. Cross wing at higher end of hall comprises earlier structure, further extended and remodelled in circa 1700. To rear of this cross wing, at junction with rear elevation of hall a stair projection containing a circa 1700 stair serves both ranges. Much of the remaining part of the building was rebuilt and remodelled in 1750 and in 1860-62 by J.P. St Aubyn with C19 kitchen and service wings in the south range completing an overall 'U' shaped plan. The courtyard was then enclosed in the mid C19 on the south side by further service rooms with a lych gate on the west giving access to the courtyard.

Front elevation to north; large projecting tower of three stages with wide two-centred freestone C19 arch. Corbelled angel above with heraldic shield. Drip stone above, originally probably cill of mullion window. Four-light mullion and transom window above with three-light mullion and transom in third stage. Stair turret in northeast corner with quatrefoiled stair lights. To the left, the north gable end of the chapel with three-light C19 Perpendicular tracery below a two-centred arch with hoodmould. To the right, the front wall of the hall, later the drawing room, appears to have rebuilt in circa 1860-62. Ground floor with two three-light mullion and transom windows. First floor with two two-light mullion and transom windows. The stair turret to the west has a battlemented parapet. The entrance door has a two-centred chamfered arch with a single trefoil light above, to right of centre and a clock above. The hipped end of the west cross wing to the right has C20 fenestration on ground and first floor in earlier sash window openings. The two storey west wing has been raised at the eaves and the central gabled projection has been remodelled. In circa 1700 this range was remodelled to form a near symmetrical west front elevation of 3:3:3 windows. However, a C20 ballroom now blocks part of the ground floor and much of the first floor fenestration, although retaining the original openings, has been altered in circa 1960s.

Interior; North range; through passage and hall probably remodelled in circa 1700 contemporary with the remodelling and extension of the west wing. Further remodelling in 1860, wide through passage with moulded circa C19 two-centred arches, pointed double entrance door with ovolo-moulded heavy glazing bars, circa 1700 cornice and circa 1700, double fielded panelled door on east. Hall, later drawing room and now bar remodelled in circa 1700, with complete bolection moulded panelling with chair rail and heavy dentilled cornice, decorative plasterwork with moulded ribs and bolection moulded marble fireplace with painted shield above with heraldic quartering of the Trelawny family marriages. Further painted armorial bearings above other doors.

Chapel now used as linen store. Dedicated in 1701 and rebuilt in 1860 with brick vaults in the basement. Coursed stonework with incised lines. C19 hammer beam roof with painted timber carved angels bearing the instruments of the passion together with stone carved angels on corbels, possibly some reused from earlier chapel. Canopy belonging to Bishop Trelawny originally at west end now removed. East end obscured at time of inspection.

Clock tower with stone newel stair. Clock by Dent, Cockspurs, Charing Cross. Bell in clock tower inscribed 1665 B P J Trelauny (Bishop Jonathan Trelawny). Roof structure to north range replaced in circa mid C19 with king post truss roof. Roof structure over west range probably contemporary with the circa 1700 remodelling; principals halved and lap-jointed and pegged at apex with collars lapped on to the face of the principals and pegged. Similar roof structure over the circa 1700 stair projection at the angle of the north and west ranges.

Full access to house not possible at time of inspection.

Domesday manor held by Rainald de Vautort. Later held by the Cardinans, Chapernouns and Bonvilles. In 1554 the estate was confiscated from Henry Grey, Duke of Suffolk and father of Lady Jane Grey. In 1600 Trelawne was sold by Elizabeth I to Sir Jonathan Trelawny. In 1668 the Right Rev Sir Jonathan Trelawny was among the seven bishops brought to trial by James II. (qv Cornish Anthem). Trelawny occupied successively the sees of Bristol, Exeter and Winchester and died at his London Palace in Chelsea in 1721. He is buried in Pelynt Parish Church (qv).