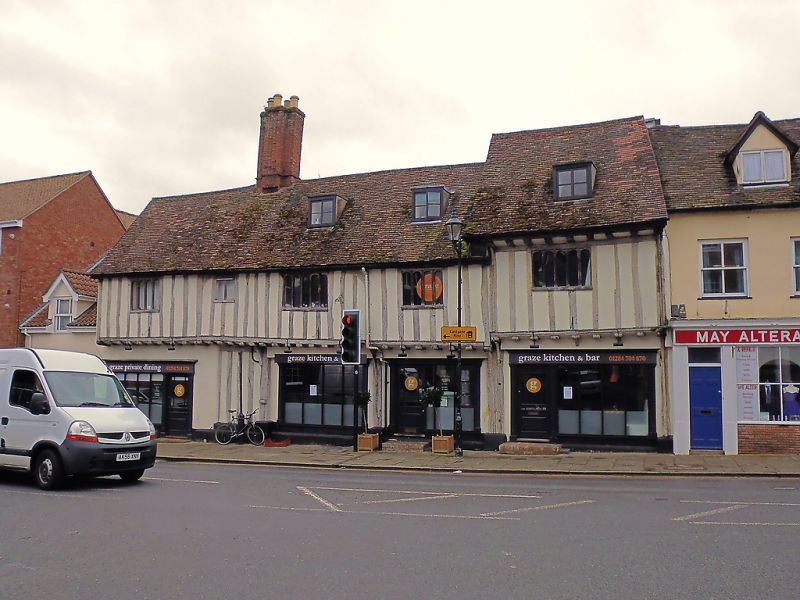 Shop and offices, formerly 3 houses and shops but originally
one house. Late C15 and early C16 with later rear extensions.
Timber-framed and jettied with exposed closely-spaced
timbering along the front, limewashed. Plaintiled roofs.
EXTERIOR: 2 storeys and attics; 6 bays. 3 flat-headed dormers
with 2-light casement windows to attics; 4 C20 reproduction
mullioned windows to first storey with arched spandrels to
lights; late C20 shop fronts to ground storey. The jetty is
supported by small solid brackets and the main posts have
ornate shafts below the brackets. Breaks in the line of the
jetty indicate that the 5 bays to the east, which include a
narrow entry bay, formed a house of the Wealden type with an
open hall in 2 bays, flanked by 2 jettied ends. The hall was
ceiled over and jettied out in the later C16. The western bay
is an addition of the early C16 in similar style which
originally had another jettied storey, but now has only the
projecting joist ends supporting the wallplate for a later
roof.
INTERIOR: some plain heavy timbering exposed. At the east end
the service partitions have been removed and a C16
chimney-stack has been inserted backing up against the cross
entry, with an embattled beam at the lower end of the hall now
embedded into the brickwork. All timbers are covered in the
attics, but it is thought that no part of the roof structure
is original.