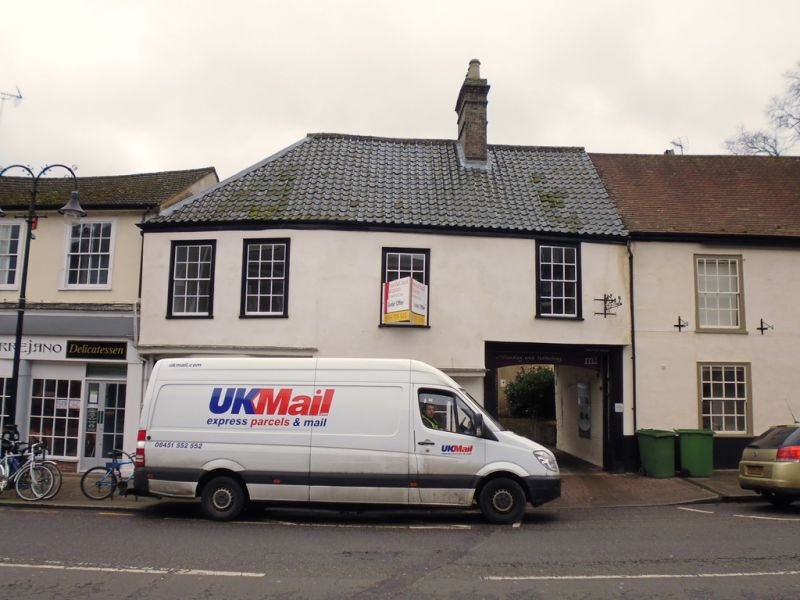 Offices, formerly a house and shop. C16 with C18 exterior.
Timber-framed and rendered; pantiles to the front slope of the
roof; old plaintiles to the hip at the east end.
EXTERIOR: 2 storeys and attics; frame in 2 separate halves,
both jettied. An internal chimney-stack with a plain white
brick shaft. 4 sash windows to the upper storey, all 12-pane
in flush cased frames, but not all at the same level. The
eastern half of the front has a shallow canted bay beneath the
jetty with 3 late-C19 sash windows with vertical glazing-bars
above painted brick base. One segmental-headed dormer. The
western half of the front has a high carriage entrance which
is probably a later insertion and a 6-panelled entrance door
with pilastered doorcase and cornice and narrow C20 side
windows.
INTERIOR: with some framing exposed. The junction between the
2 frames is clear, with the remains of a heavily-studded end
wall to the eastern half: this has a small single-light
original window at the north-west angle, which was blocked by
the addition of the western half. Only one ground-storey bay
of the western half is within the building, with a small
fireplace on the west wall, the remainder forms the carriage
entrance with a room above. A wide chamfer and triangle stops
to the main beam of the ground-storey ceiling. A C19 stair has
turned balusters and a plain handrail. Attic inaccessible.