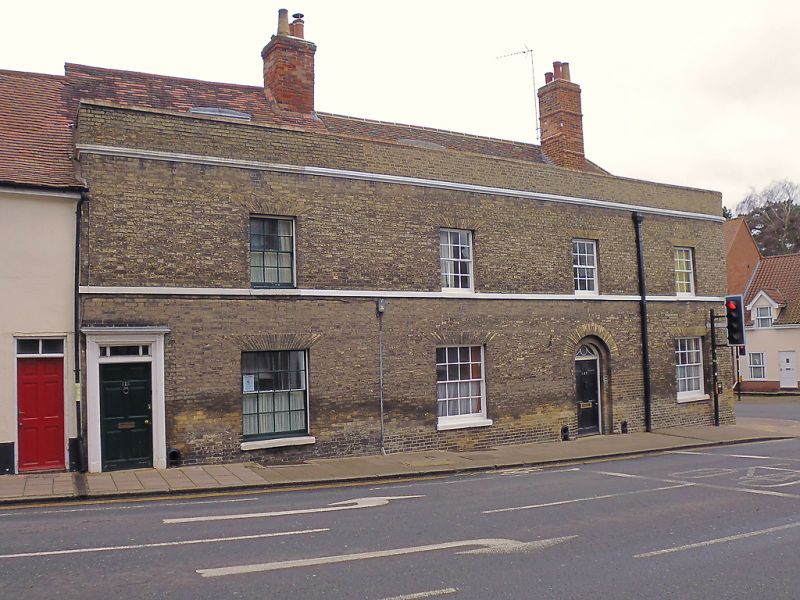 2 houses; No.127 now offices. C16 and C17 core, early C19
front. Timber-framed, faced in white brick with a parapet and
a moulded stucco band. Plaintiled roof, hipped on the south:
the ridge level of No.126 is higher. Corner site.
EXTERIOR: 2 storeys, cellars and attics. 4 window range to
Northgate Street: 12-pane sashes to the 1st storey and wider
16-pane sashes to the ground storey, all in plain reveals with
very wide flat arches above. 2 window range to Mustow Street,
all blocked. A raised stucco band runs below the 1st storey
windows. Two 6-panel doors: to No.126 recessed, with a reeded
wood architrave and a rectangular fanlight; to No.127 with a
double brick arched head and a semicircular fanlight with
ornamental glazing bars. 2 plain red brick internal
chimney-stacks.
No.126 has a C19 rear extension which links with a C16
2-storey rear wing, probably originally a detached building.
This has the north wall and part of the south wall in Tudor
brick, laid in an irregular bond. The high ground storey room
rises to wallplate level with attics above. 2 high 12-pane
sash windows in flush cased frames were inserted in the early
C19 along the south side. A gable end wall in C19 brick
includes an external chimney-stack.
INTERIOR: No.126 has a small cellar, lined in brick and flint
with 3 niches in the north wall and the remains of an original
timber ceiling. The narrow single-bay front range is
timber-framed, probably added, in conjunction with the
chimney-stack, to No.127. On the ground storey, a boxed main
beam and a reeded early C19 fireplace surround with an ornate
cast-iron grate. On the 1st storey some components are
exposed: the tie-beam is a softwood replacement on earlier
posts. The end wall on the north has long thin arched braces
to the tie-beam but no evidence of studding. The small
fireplace has a bolection-moulded surround.
The front attic has exposed common rafters and is ceiled at
collar level: the collars appear to be resited. A cupboard
doorway has rebated jambs and a 4-centred arched plank head.
The early C19 stair in the rear hall has stick balusters and a
wreathed handrail and rises the whole height of the house.
Internal shutters with sunk panels to the sash windows in the
rear wing. No.127 has framing exposed on the 1st storey,

including the wallplate and part of the studding along the
original back wall.
A good late C17/early C18 winder stair at the rear of the
entrance hall has a flat moulded handrail and dumb-bell
balusters. To the left, a fully panelled room with bolection
mouldings and dado and a fireplace surround with ornate
architrave and dentils. 2 upper fireplaces have C18 wood
surrounds with overmantels. Plastered attics.