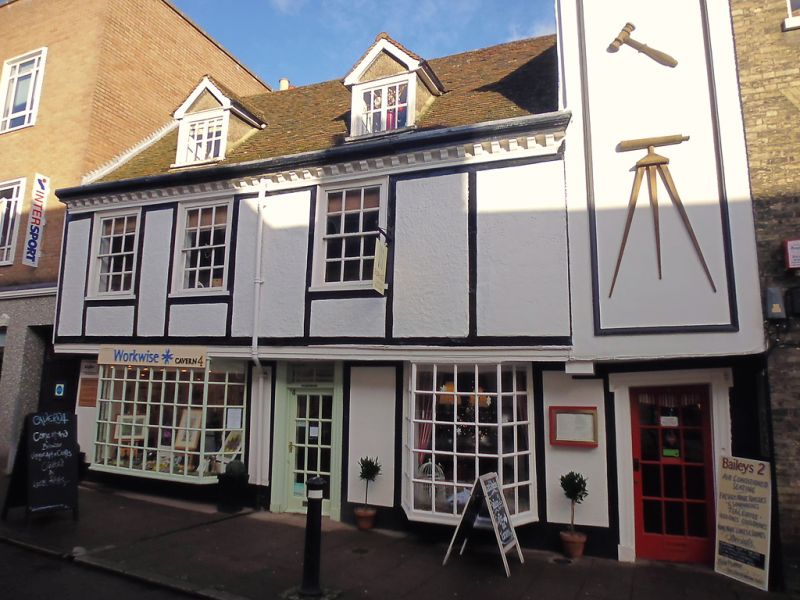 House, now shop and offices. C16. Timber-framed and rendered
in panels with old roughcast. Tiled roof with modillion eaves
cornice.
EXTERIOR: 2 storeys and attics; jettied along street frontage.
3 window range: 12-pane sashes in flush cased frames. On the
ground storey, one low canted bay window on the right with
glazing bars and one larger C20 bay in C18 style on the left.
C20 shop door in a moulded architrave with rectangular glazing
bars to the fanlight. 2 gabled dormers. The building overlaps
with No.6 (qv) on the right with a 2nd entrance door, below an
extension to the jetty, in a reeded and shouldered architrave;
the upper storey forms part of No.6.
INTERIOR: irregularly divided between Nos 4 and 5. The cellar
to both is below No.4. Under the 2-bay front range it has been
used in modern times as a room and has a fine moulded ceiling
with heavy cross-beams and joists, all with a double ogee
moulding, which seems certain to be an insertion. Below one
rear wing another 2-bay section has a heavy plain ceiling with
a large chamfered main beam and unchamfered joists.
No.4, in addition to the cellar, occupies only part of the
ground storey: the northern bay of the front range and a long
rear wing. The front room is fully panelled with C18 panelling
and a has a heavy moulded cornice and corner fireplace.
In the rear wing are 2 further one-bay rooms, one with
panelling similar to the front, the other with an exposed
timber ceiling with chamfered main beam and plain joists. An
internal stack links the front and rear, but is covered apart
from a cast-iron bake-oven door. No.5 occupies the remainder
of the building: half the front range, and the whole upper
storey.
The front room is a continuation of the adjoining room in
No.4, and they must originally have been in one: boxed-on main
beam and the remains of panelling. The back wall has been
removed to give access to a single-storey rear wing, probably
C19, but entirely modernised.
The upper part of the 2-storey rear wing is divided into 2
rooms with most features covered. Part of the north wallplate
is visible and a small section on the south with part of the
rebate for a shutter, but the roof has been raised. The 2
upper rooms above the front range have been made into one: