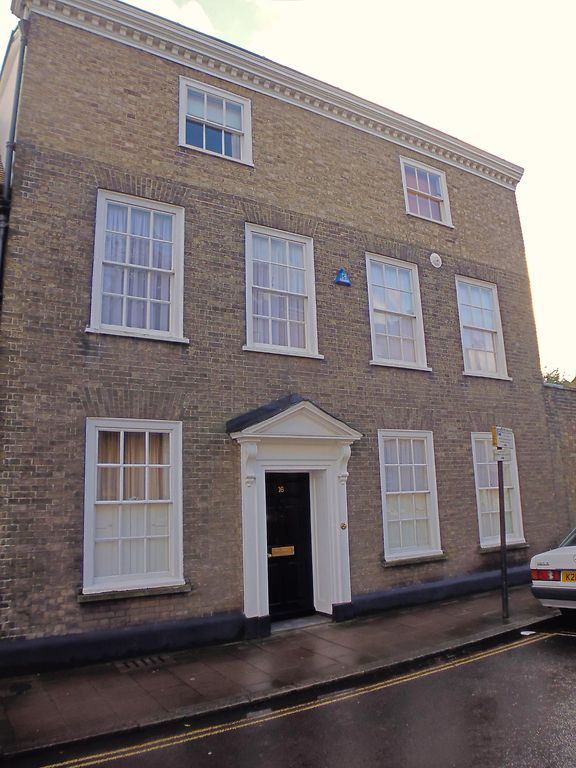 House. C18, with earlier core to part. Timber-framed; fronted
in C18 white brick with a slate roof and a wood modillion
eaves cornice; a parallel lower rear range is rendered.
EXTERIOR: 3 storeys: the 2nd storey is an addition and the
rear is 2-storey. 4 window range to the ground and 1st
storeys: all 12-pane sashes in flush cased frames. 2 6-pane
sash windows to the 2nd storey. A 6-panel door has an unusual
original knocker with an Egyptian head; doorcase with panelled
reveals, shouldered architrave and dentilled pediment on
moulded and enriched console brackets. 12-pane sash windows in
flush cased frames to the upper storey of the back and a
single storey lean-to with Edwardian small-paned French doors.
A small wing at the east end has 16-pane sashes. Attached to
the north-west corner of the front is a high stretch of garden
wall linking with the side of No.17 (qv): in red brick on the
inner face but in white brick with plain pilasters and a
coping along the street frontage.
INTERIOR: cellar on 2 levels: on the west, C19 vaulted brick,
on the east, with a timber ceiling, joists renewed. The front
range has a timber-framed core with main beams now boxed and
panelled and moulded wood cornices. Internal window shutters
with sunk panels.
An added room on the west beyond a wide panelled segmental
arch. Some main timbers are exposed on the 1st storey of the
front range. The early C19 geometric stair rises 2 storeys:
stick balusters, open bracketed strings, wreathed handrail.
The rear wing has a chimney-stack on the east wall with Tudor
and C17 bricks, probably re-used.