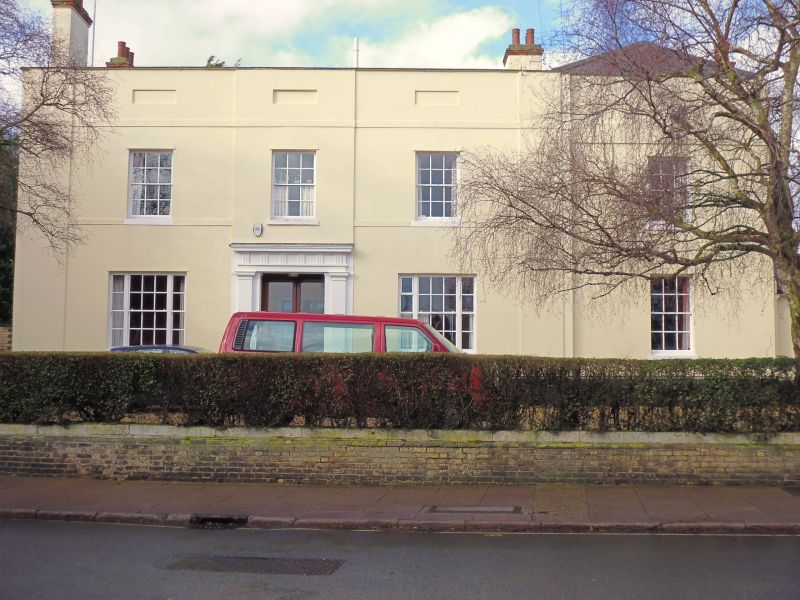 House, now a residential hostel for the West Suffolk Health
Authority. Early C17 with C18 and C19 alterations.
Timber-framed and roughcast rendered. Part C20 plaintiled
roof, part flat roofed with a parapet, part slate. 2 parallel
ranges, the rear with an attic storey. The remains of a
cross-wing at the east end.
EXTERIOR: 2 storeys and cellars; 4 windows to 1st storey, all
12-pane sashes; 3 windows on the ground storey, 2 tripartite
with 12-pane central lights and one 12-pane sash. A doorcase
with Doric pilasters, triglyph frieze and cornice.
The rear range has a steeply-pitched roof, at the east end
with a modillion cornice; the remainder has a later
roughcasted front with parapet. 2 large dormers in the roof
have sash windows and pierced and fluted bargeboards.
INTERIOR: cellar below the east half of the building is mainly
brick-lined with some vaulting. Both front and rear ranges
have main timbers exposed: at the east end a plain chamfered
main beam with scroll stops; in several of the remaining
ground storey rooms ovolo-moulded main beams. One rear upper
room has ovolo-moulded cross-beams. Several moulded plaster
cornices. Main posts with long jowls, one shaped. C19 stair
with stick balusters and wreathed handrail. Rafters concealed,
but the roof has some form of side purlins.