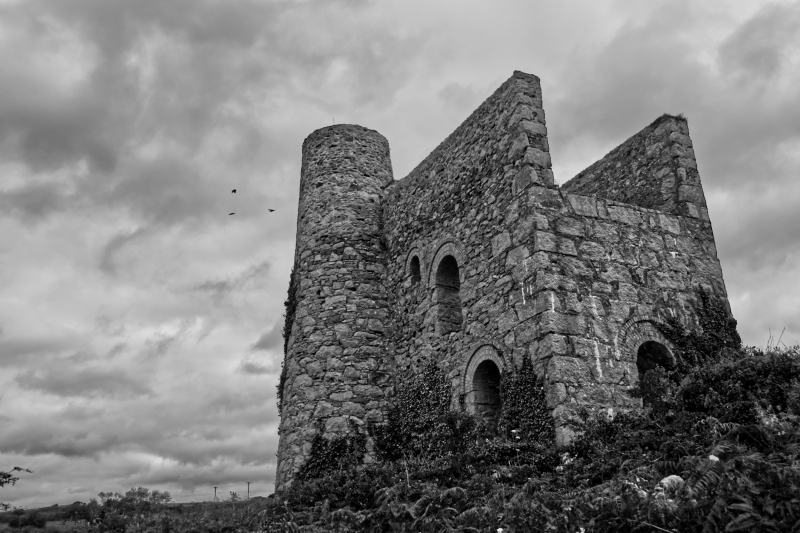 GV II
Pumping and winding engine house to former tin mine, now derelict. 1879-81, for
South Frances Mine. Uncoursed granite rubble with quoins, bob wall of large
dressed granite blocks, window arches of brick; now roofless. Rectangular plan on
east-west axis, with bob wall to west, loadings for pumping and winding gear in
front of this, remains of boiler house attached to south side, and chimney
attached at north-east corner. Three stages, with mostly round-headed openings,
including driver's window in bob wall, damaged cylinder door in rear wall (which
is thicker than bob wall), a pair of small blocked windows above this and a
larger window in the gable, a square-headed doorway to the former boiler house
on the south side, round-headed windows on 2 levels to the right of this and a
small blocked window to the right of the upper of these. Tapered cylindrical
chimney stack of unusually large diameter (4 metres at the base), now
terminating at gable level. Very prominent double loadings extending approx.10
metres in front of bob wall, one on the main axis for the flywheel and flat-rod
connections to the pump, and a longer one parallel to it on the north side of the
flywheel recess, for the winding drum. Remains of boiler house very fragmentary.
History: the shaft, approx 60 metres to the west, was sunk at the request of the
mineral lords in a period of expansion when mining here reached the Great Flat
Lode, and named after J.C.Daubuz, a principal shareholder; the building contained
a 30-inch engine, and its application to both pumping and winding was unusual.
Reference:Marilyn Palmer & Peter Neaverson The Basset Mines, their History and
Industrial Archaeology (1987).