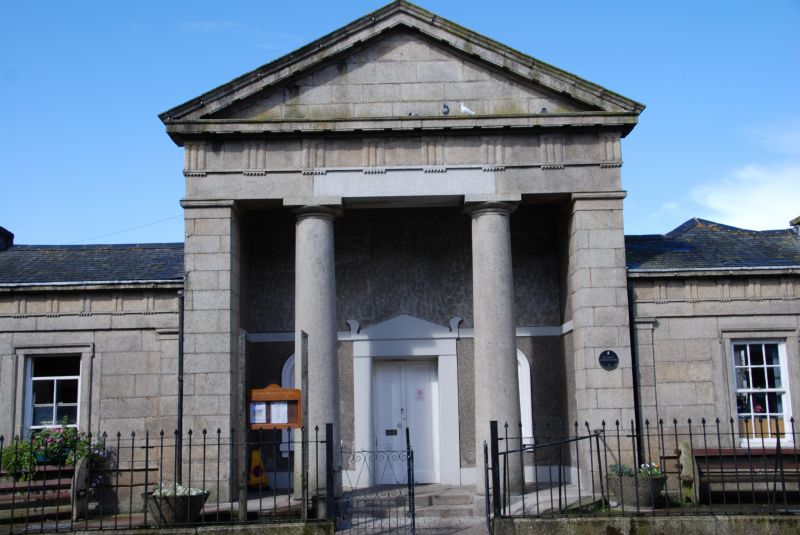 Literary Institute, now social centre. 1842, enlarged 1852; altered. Granite
ashlar, slate roof. T-plan formed by hall at right-angles to the street
flanked by small wings; plus later extensions to the rear. Greek Revival
style. All single storey, but the hall much taller, presenting a giant Doric
portico, distyle in antis, with triglyph frieze and mutule pediment,
protecting a central doorway with simple pedimented surround and 2 round-
headed windows with moulded architraves and keystones, and glazing with
coloured margin panes. The wings, at right-angles to the hall, each have
clasping corner pilasters, a sashed window with sill-band and shouldered
architrave (4- and 12-paned respectively), and entablature with simplified
triglyphs and guttae; their gable walls are pedimented, with a triglyph
frieze. Forecourt enclosed by simple spear railings with wrought-iron gates.
To the rear of the right-hand (north) wing is a former lecture hall, added
in 1852, which is stuccoed, with vermiculated quoins and surrounds to
openings, a tripartite window to the 1st portion, and a round-headed
doorway with a shallow porch, flanked by tall round-headed windows on a
high level. Interior altered. History: Camborne Literary Institute founded
in 1829, this building erected on site given by Richard Vivyan and formerly
occupied by 1st Methodist chapel in Camborne.