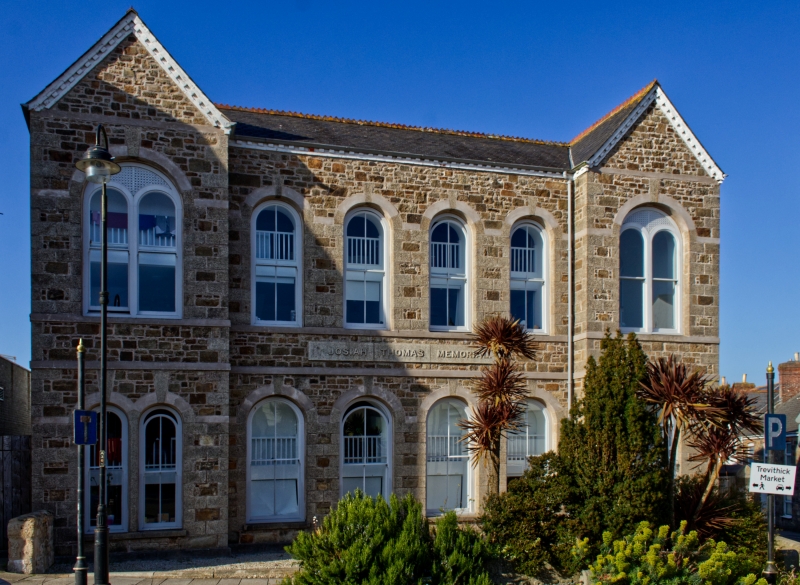 PLAN: the original front section is a shallow ‘U’ shape range with a later extensions added to the north, and a single-storey attached range projecting from the west elevation.

MATERIALS: various types of coloured granite stone with a slate roof and a concrete-rendered range to the rear.

EXTERIOR: the front (south) elevation is a symmetrical front with gables at either end. It is two stories and has three bays consisting of two end bays and a recessed larger central bay with four windows on both floors. The windows in the central bay are two-over-two horned-sashes topped by round arches. The first-floor windows in the gables are paired round-arched sashes set within a large arch with timber, fretwork-decorated spandrels above. The ground floor of the left gable contains a pair of sash windows divided by a granite mullion; the entrance is within the right gable and is a double door under a semicircular overhead light. All of the openings are topped by arches with dark grey granite stone voussoirs, and oversized keystones and quoins of lighter grey granite. There is a dog-tooth dentil course at eaves level. A first-floor sill band and a drip mould run around the front and side elevations of the original stone building encompassing a stone plaque with raised letters reading ‘Josiah Thomas Memorial Hall’. The rear extension has a two-storey flat roof with an attached stack, casement windows, and a side entrance on the east elevation and a smaller two-storey extension on the rear with an external fire escape. The single-storey granite-faced range on the west elevation has a hipped roof, squared horned-sash windows and a chamfered corner wall.

INTERIOR: the conversion of the building to offices and later a health care facility has led to alterations to the internal plan of building. Most of the partitions are stud walls with some internal glazing, and the internal doors are late C20. Some key original features do survive including the original open-string staircase with newel posts decorated by scroll mouldings and ball finials, and the entrance hall with plaster ceiling cornices. There is also a plaque next to the stairs which commemorates the building as a memorial to Josiah Thomas. Secondary glazing has been added to the front ground-floor windows. Suspended ceilings have been inserted, with the original undecorated ceilings surviving above.

Josiah Thomas Memorial Hall was originally built in 1872 as the Tehidy Working Men’s Club. The working men's club was one of a series of mid- to late-C19 buildings which were commissioned by the Bassets, a locally-important industrial family which helped transform the town of Camborne during the second half of the C19. The minute books of the Tehidy Working Men’s Club mentioned that the building consisted of a billiard room, reading room and other typical institution rooms. It also mentioned the use of part of the building for administration by the local labour office. The original building consisted of the front granite stone range; it was later extended to the north. The single-storey granite stone range to the west may be contemporary with, or possibly an earlier building which was incorporated into, the working men’s club. In 1935, due to financial difficulties, the club sold the building to the Camborne School of Metalliferous Mining. The building was adjacent to the Basset Memorial Building, which was built in the late C19 following a bequest by Gustavus Lambert Basset, the mine entrepreneur, to build a laboratory in Camborne; the building was demolished in the late-C20. The former working men’s club was refurbished and equipped for use as a school. It was re-named the Josiah Thomas Memorial Building after Captain Josiah Thomas (1833-1901) the manager of Dolcoath Mine and who became a prominent figure in the south-west mining community and held many public offices including Chairmanship of the Governing Body of the School of Mines from 1887-1901. The Camborne School of Mines was founded in 1888 in order to provide theoretical and practical skills to mineworkers in order to improve the efficiency of the mining process and was one of three full-time mining schools in Camborne, Redruth and Penzance. In 1897 King Edward Mine, Camborne, was acquired for practical training in underground and surface work. In the early 1900s the three schools were amalgamated into the School of Metalliferous Mining. From the 1970s until the early C21 the Josiah Thomas Memorial Hall was used by the Cornwall National Health Service Trust as a health centre which involved further internal rearrangement.

The Josiah Thomas Memorial Hall is designated at Grade II for the following principal reasons:
* Historic interest: it is late-C19 example of a purpose-built working men’s club which played an integral role in the local community and was funded by the Bassets of Tehidy, an important Cornish mining family and well known for their philanthropy; it also has added historic interest through its subsequent use as part of the internationally-renowned Camborne School of Mines;
* Architectural interest: it presents an attractive external appearance, with good quality granite detailing, which has not been diminished by later extensions to the rear;
* Interior: despite the insertion of later stud partitions, changes to the plan and the loss of some original internal features, the building does demonstrate some good internal decoration in the main entrance hall, including the original staircase and ceiling detail;
* Rarity: usually housed in modest adapted premises, very few working men’s clubs have survived with sufficient special interest to merit designation; the Josiah Thomas Memorial Hall represents an early example of a purpose-built working men's club demonstrating clear architectural pretensions.