A Grade I Listed Building in Camborne, Cornwall 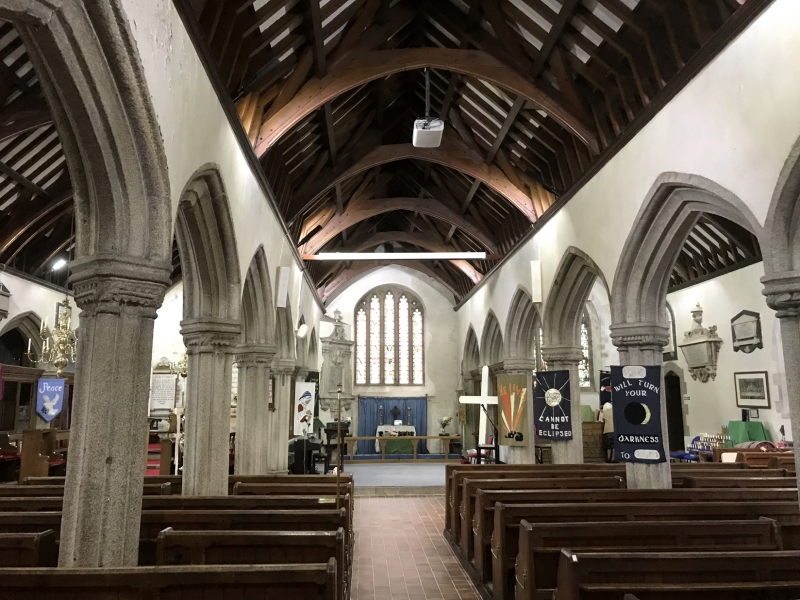 CAMBORNE CHURCH STREET
SW 64 SW
(south side)
10/37
Church of St Martin and
1.12.51
St Meriadocus
GV
I
Parish church. Mostly late C15 in one build, but incorporating some fabric
of smaller earlier C15 church; restored and enlarged in 1878. Dressed
granite, slate roofs. West tower; nave and chancel in one, with north and
south aisles and additional south aisle of 1878, under a 4-span roof. The 3-
stage tower has setback buttresses, a 2-centred arched west door with
hollow-chamfered surround and hoodmould, a similarly arched 4-light
window with Perpendicular tracery, weathered bands to the slightly set
back upper stages, a small lancet in the north side of the 2nd stage, a 3-
light traceried belfry window in each side of the 2nd stage, and an
embattled parapet with corner pinnacles. The 5-bay north aisle has a plinth
with moulded coping, a buttress between the 1st and 2nd bays, a Tudor-
arched doorway between the 4th and 5th bays with 2 orders of moulding in
a square-headed moulded surround with a hoodmould, 5 Tudor-arched
mullioned windows each of 4 pointed arched lights with cavetto mullions,
hollow spandrels, surround moulded in 2 orders, and hoodmould curved
round the head; to the left of that in the 1st bay is an earlier and smaller
window with a flat Tudor-arched head, 4 trefoil lights, moulded surround,
and simple hoodmould; the west end has a 4-light window like the others,
and the east end has a 4-centred arched window of 5 cinquefoil lights with
a hoodmould and a weathered sill-band. The chancel, which projects, has a
large 5-light east window matching those of the north aisle. The original
south aisle has a 2-centred arched west window of 4 cinquefoil lights with
tracery in the head, and a 4-centred arched east window of 5 cinquefoil
lights; the added south aisle has large 5-light traceried east and west
windows, and its south side has a gabled porch to the 1st bay with 4-
centred arched doorway incorporating C15 semi-octagonal jambs with
brattished caps, a sundial over the door lettered "Hora Pars Vitae" and
dated 1793, and 4 windows each of 3 cinquefoil lights with Perpendicular
tracery in the head. Interior: 7-bay arcades to nave and chancel with
Cornish piers, horizontal carved leaves on the caps, and 4-centred arches
with cavetto and roll moulding (imitated by the added aisle); restored
arch-braced collar-truss roofs; in chancel, a simple aumbry and piscina,
and a fine marble tripartite reredos in classical style, with Commandment
Tables in shouldered panels under an open pediment, flanked by Lords
Prayer and Creed in lugged panels under swan-neck pediments, lettered
medallions in the dado stating that it was given by Samuel Percival of
Pendarves in 1761; side walls have dado made of fine late medieval carved
bench ends; in altar, a C10 altar slab from Chapel Ia, Troon, with keyed
border and inscription including the name Leuiut; late medieval oak pulpit
with carved panels and coat of arms; several fine wall monuments, esp.
William Pendarves (d.1683), Sir William Pendarves (d.1726), Anne Acton
(d.1780), Mrs Grace Percival (d.1763), founder of Charity School in
Camborne; in tower, large painted panels including Charles I 1643 letter to
the County of Cornwall (dated 1736).