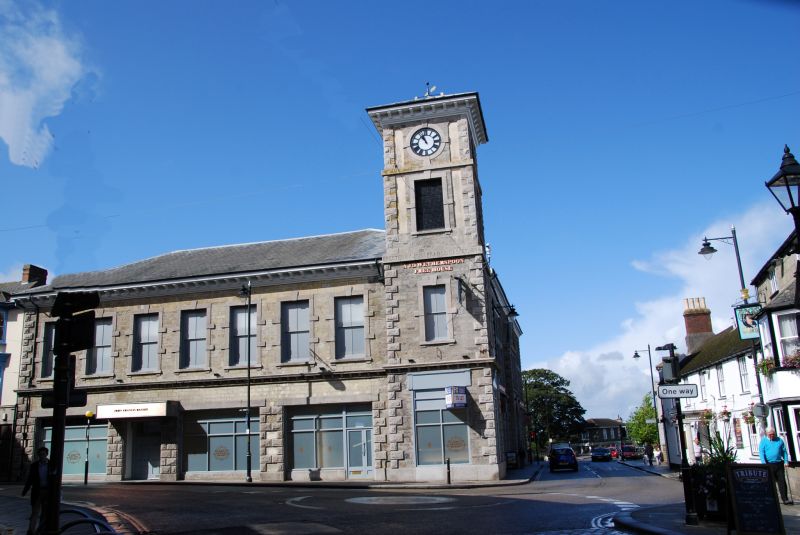 CAMBORNE CHURCH STREET
SW 64 SW
(south side)
10/36
Nos.3 and 5
4.11.76 (The Berkeley Centre,
formerly the Old Market House)
GV II
Includes Nos.l9 to 25 (odd) Commercial Street. Town Hall and Market House, now cafe, resaurant, etc. Erected 1866 by John Francis Basset of Tehidy, as recorded by inscription on tower; enlarged 1911; altered. Granite and sandstone ashlar, slate roof. Rectangular block on corner site, greatly enlarged westwards along Church Street. Italian palazzo style. Two and 3 storeys, with 4-stage corner tower; plinth, rusticated rock-faced quoins, modillioned cornice at 1st floor level, bracketed eaves. The stages of the tower are successively slightly set back and separated by the cornice and then by plain bands, the lower of which is inscribed "ERECTED BY JOHN FRANCIS BASSET 1866"; the ground floor has inserted shop fronts in both sides, the 1st and 2nd floors have windows with raised keyed surrounds (4-pane sashes at 1st floor, and mesh at 2nd floor), the top stage has a clock face in each side (flanked by sunk panels carried up from the 2nd floor),
prominent bracketed eaves, and a low pyramidal lead roof with a weather vane. The block of which this forms the corner, which was originally the Town Hall, with magistrates rooms above, is 2 storeys with 7 bays to Commercial Street and 2 bays to Church Street, the ground floor altered (large rectangular openings replacing the original arcade of round-headed doorways and windows like those in the Church Street facade) and the 1st floor with 4-pane sashed windows which have raised keyed surrounds like those in the tower. The large continuation on Church Street, which was originally the single-storey Market House, was raised in 1911, and is 12 bays and now 3 storeys (except the first 2 bays which form a 2-storey link), symmetrical except at 2nd floor; in the centre the originalprojecting pedimented entrance archway, raise to 2 storeys in 1911, has a large round-headed arch with quoined surround and keystone, coupled sashed windows at 1st floor, and a carved roundel in the pediment; otherwise, the ground floor has tall round-headed windows with rusticated rock-faced quoins and stepped voussoirs, the 1st floor has windows matching those in the original block, and the 2nd floor has round-headed windows with similar surrounds, and a keyed oculus on each side of the entrance pediment. The west return wall of 4 bays is rendered, with plain surrounds to similar fenestration. Interior not inspected.
Reference: Michael Tangye, Tehidy and the Bassets (1984), p.64.