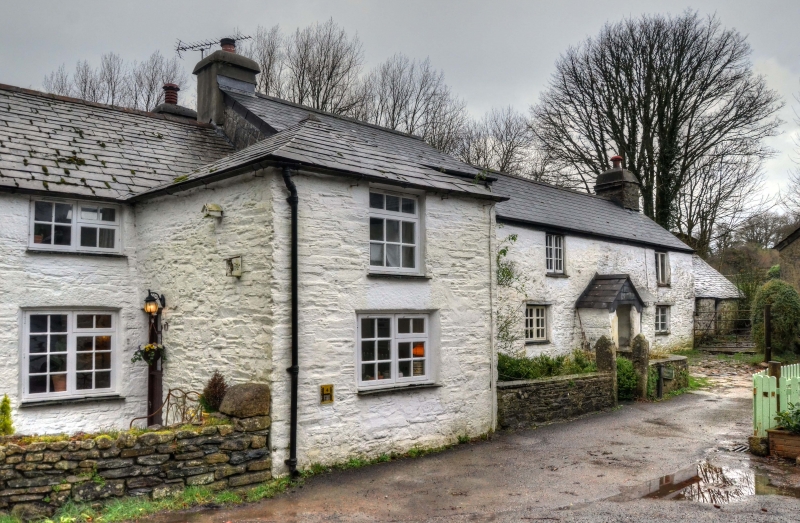 Post Office and adjoining cottage. Circa mid C17 extended in early C19, late C19 and
late C20. Rendered and painted stone rubble and possibly cob. Asbestos slate roofs
with gable ends. Stone rubble end stack on right and stone rubble end stack on left
with similar end stack to parallel range to rear.
Plan: Two room and cross or through passage plan house, the larger hall kitchen to
right heated by end stack and smaller probable parlour to left also originally heated
by end stack. Extended on left hand side in circa early C19 with one-room plan
cottage, heated by end stack on left. This cottage was further extended to rear in
circa later C19 with a second room heated by an end stack. The plan has now been
altered. The right hand room of the earlier house is now Corner Cottage and the
passage, left hand room and later early C19 cottage to left are now the Post Office
with private accommodation.
Exterior: Two storeys. Asymmetrical 1:2 window front. The earlier house on right
has an asymmetrical 2-window front with C19 porch to left of centre, of stone rubble
with gable end and chamfered granite doorframe within which has been blocked. Two-
light casement to left and door to right with slate hood and C19 2-light casement
beyond. First floor with C20 window to left and 2-light casement to right. The
later cottage to right has a higher roof and an asymmetrical one-window elevation
with C20 window to left and C20 door to right. C20 window on first floor.
Interior: Ground floor cross wall between left hand cottage and left hand room of
earlier house removed.
Interior of right hand cottage (Corner Cottage) not inspected.