South Harbour Pier, Quay and Walls on South West Side of Harbour 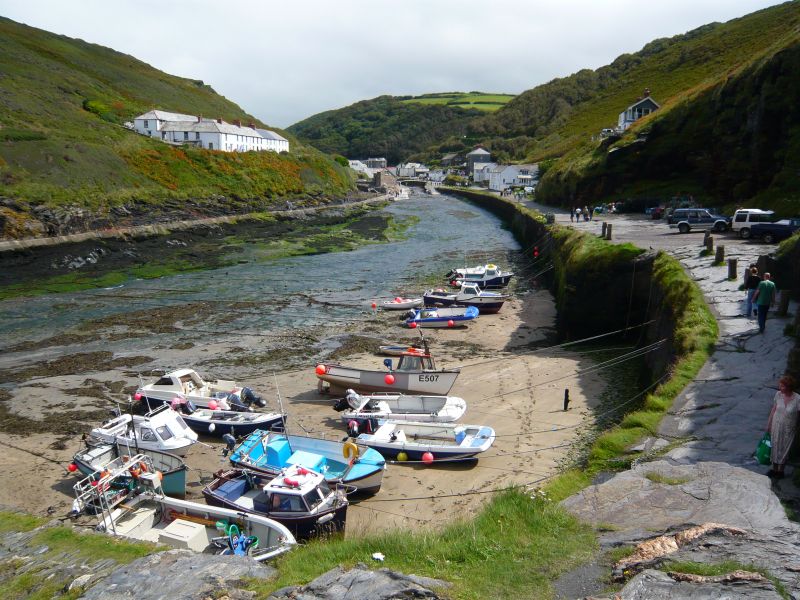 1/61 South harbour pier, quay and walls
17.12.62 on south west side of harbour
GV II*
Harbour pier, quay and walls on south west side of harbour. Circa 1584. Slate stone
rubble and quartz. The pier is constructed of vertically coursed rubble, partly
rebuilt on the east. It projects from the west, curving gently and giving protection
to the natural harbour on the south. The outer seaward side is raised and there is a
cobbled path with slip on the leeward, south side.
The south west wall of the harbour is largely constructed of vertically coursed slate
stone rubble, interspersed with natural outcrops of rock. Quay directly to south of
southern harbour pier with high cliff to west. The north east side of the harbour is
enclosed by natural outcrops of rock.
A pier had been erected at Boscastle by 1547 and in 1549 The Church of St. Thomas,
Launceston, had contributed towards the repair of the quay. In circa 1584, a
memorandum was drawn up by the townsmen of Boscastle, at the request of Sir Richard
Grenville, Sheriff of Cornwall; this sets out full details of the wages paid out in
the first 14 months of work on the rebuilding of the pier. A letter from Grenville
gives full details of the dimensions which correspond closely with those of the
existing pier.
The pier was restored in 1740 by Mr Cotton Amy and in C18 an outer bar was built. The
latter was destroyed during World War II and reconstructed in 1962 reusing stone from
the demolished Laira Bridge, Plymouth.
The busy port of Boscastle exported corn, roof slates and bark for leather tanning;
between circa 1815 and 1840 exporting manganese ore from the mines near Launceston
and after 1865 china clay from Bodmin Moor. Imports included wine and spirits,
pottery, coal, manure and limestone. A description of the port in 1861 described the
numerous warehouses, workshops, shipyards and timber yards.
This is a fine early harbour structure in a particularly picturesque setting.
Pearse, Richard The Ports and Harbours of Cornwall 1963
Williams, Michael Boscastle 1978