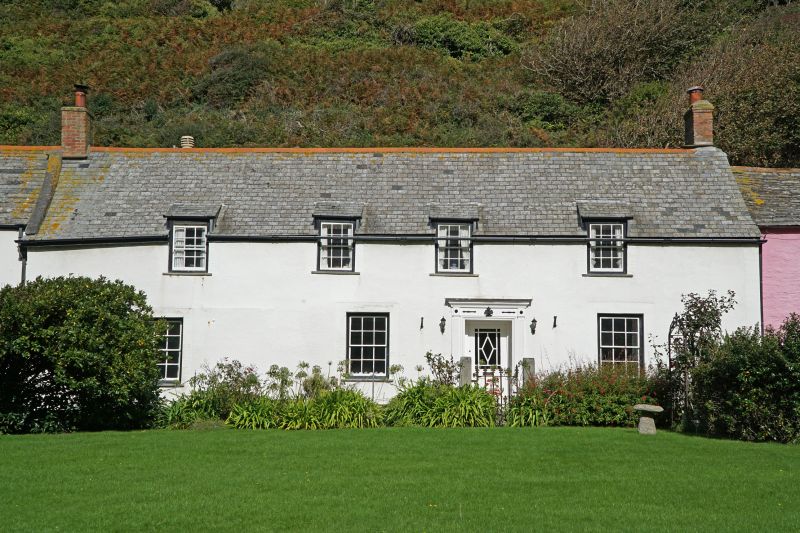 FORRABURY AND VALENCY ROW, Boscastle
SX 09 SE MINSTER
1/90 Valency House (previously listed
as Valency Guest House)
17.12.62
GV II
House converted into hotel. Circa early to mid C17, remodelled in mid C19. Rendered
and painted stone rubble. Cement pointed rag slate roof with gable ends, the ridge
tiles renewed in late C20. Gabled rag slate roof to stair projection on rear. Brick
shafts to stone rubble end stacks and shaft to projecting rear lateral stack removed.
3 room and cross or through passage plan, the lower end on right and the inner room
on left heated by end stacks, the hall heated by a rear lateral stack. In circa C18 a
stair was added to the rear of the passage probably contemporary with the addition of
a dairy and kitchen in single storey outshots to the rear of the hall, inner room and
lower end. In circa mid C19 the interior was remodelled the stair was replaced and
the outshot to the rear of the hall and inner room raised to two storeys.
Built into the side of the hill with ground rising to rear. 2 storeys, asymmetrical
four window front. Ground floor; 3 early C19 12-pane hornless sashes with entrance to
right of centre. Circa early C19 doorcase with fluted pilasters, frieze and cornice
and early C19 partly glazed door with lozenge and margin glazing bars. First floor;
four early C19 hornless 12-pane sashes in half dormers with raking roofs.
Interior high quality C19 detailing; entrance hall with cornicedecorated with band of
acanthus leaves and arch with incised pilasters. The fireplace in the lower right
hand room has been remodelled in the C20, the lintel probably renewed; the plaster
cornice remains largely intact with egg and dart motif and vine-leaf trail. The
partition between the hall and inner room has been altered, the hall fireplace
blocked and the fireplace to the inner room rebuilt in the C20. Early to mid C19
open-string stair with wreathed rail and stick balusters and panelling to dado rail
on opposite wall.
First floor has continuous coved ceiling above C17 range; although the lathes have
been partly replaced and the ceiling wallpapered, it is possible that the coving is
C17. Several C18 2-panel doors.
Roof structure; the unchamfered principals and collars in the C17 range suggest that
the first floor was always sealed. The principals are halved, lap-jointed and pegged
with 4 oak pegs at the apices; diagonal set ridge. The collars are partly halved,
lap-jointed and pegged and there are two tiers of trenched butt-purlins. Circa C18
collar-rafter roof above stair projection C19 roof trusses to rear of hall and inner
room acommodating second storey of outshot.
Unaltered exterior and interior and situated near picturesque harbour at Boscastle.