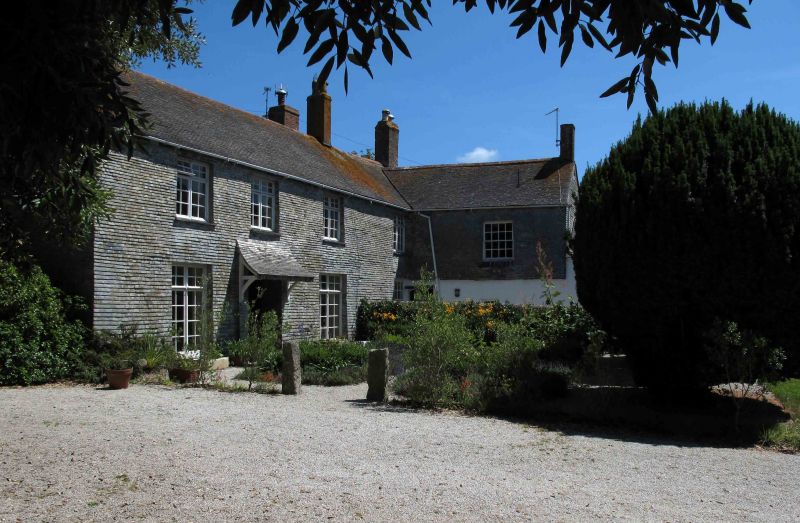 Entry Name: Penpol House Including Garden Walls and Gate Piers and Gates to South West and Those to North Including Pump

HAYLE PENPOL AVENUE, Hayle
SW 5637-5737
11/143 Nos. 12, 14, 18 and 20.(Penpol
- House) including garden walls and
gate piers and gates to south west
and those to north including pump
GV II
House, C16, remodelled in the C17, extended and remodelled in the C18 and C19.
Slatehanging to south-west front and north-west gable ends, otherwise painted rubble or rubble with granite dressings. Grouted scantle slate roofs with
tall brick chimneys over the gable ends and over the side walls. Some cast-
iron ogee gutters.
Plan: At one time an irregular cruciform plan (south-east wing later mostly
demolished); partly C17 wing at right angles to rear right and C18 wing at
right angles to front right. Rear wing was rebuilt at rear in the C19 as 2
room plan farmhouse plus rear outshut (right) and front wing was extended
with washhouse at the front. Main range has 2 original front rooms of the
house (within thick walls) remodelled as rear service rooms to a circa 1760
2-room-plan front and retaining a C17 stair tower projecting from the rear of
an entrance hall between the rooms. The rear right-hand wing is C17 or earlier
in the front 2 rooms but heightened in the C19, except for short section of
roof over the front part. There is a C17 doorway into the left hand side.
Exterior: 2-storeys. Regular 4-window slate facing south-west front. Doorway under second-from-left first floor window with slate hood on wooden brackets. C20 ledged door and C20 windows. At far right is projecting gable end of wing
and in front of the wing is a gable-ended C19 single-storey washhouse. Left-
hand wall of wing has circa early C19 sash to first floor. Overall 4 window
north-west front has C17 hollow chamfered doorway right of middle and nearby symmetrical 3 window front of rebuilt C19 front on the left with C20 door
and C20 horned sashes with glazing bars. Right of the C17 doorway is a C20
copy 3-light casement with 8 panes per light and similar window over.
Returning at right angles in front on the right is the rear wall of the main range of the house with central hipped-roofed C17 stair tower. Ground floor
left and right are C18 3-light casements with original crown glass and inner stanchions possibly for earlier leaded glazing. Copy casements over.
Interior: Circa late C17 coved and moulded plaster ceiling over the stair; bolection moulded chimney pieces to the chambers on either side of the stair. Otherwise circa 1760 carpentry; joinery and plasterwork (where visible)
including chimney pieces in the front chambers; dog-leg stair with rectangular balusters; panelled doors and moulded ceiling cornices. Roof structures not inspected but they retain some C18 or earlier work.
Garden walls in front of south-west front are grouted rubble. Gateway has
square-on-plan granite monolithic piers and C19 wrought-iron gates with
arched bracing, cross-braced lock rail and spear-head finials. Walls on
right form path beside front wing. Garden walls in front of north-west front
are granite rubble. In front of right-hand part (No. 18) the wall is older,
lower and has hogs-back granite copings. Gate piers are round-headed granite monoliths. Gate to No. 18 is C19 wrought iron with arched top rail. There is
a well in front of the right-hand end of the garden wall. Over the well is a
C19 cast iron barrel pump with its original cranked handle.
Penpol has an interesting history: owned by the Godolphins from the C16 until 1639 when sold to Anthony Honeychurch of St Erth; in 1732 in the hands of Rt.
Hon Henry Robartes, Earl of Radnor, who leased to John Curnow(Merchant Curnow)
;a daughter Jane married William Hocken, Rector of Phillack with Gwithian in 1770, another daughter, Jane, married Richard Oke Millett of Marazion in 1771. In 1788 Richard Miller bought Penpol from Lord Arundell. A later (Dr.) Richard Millet who had been living at Penpol for some years up to 1863, was accused by his brother-in-law, Dr.Edmonds of poisoning his brother Jacob Miller, by
mixing aconite in horse radish sauce served with beef. There was an inquest
and trial but he was found not guilty. Since 1921 Penpol has been owned by the Ellis family.
Historical information provided by Hayle Town Council from notes by Major Tom Ellis.