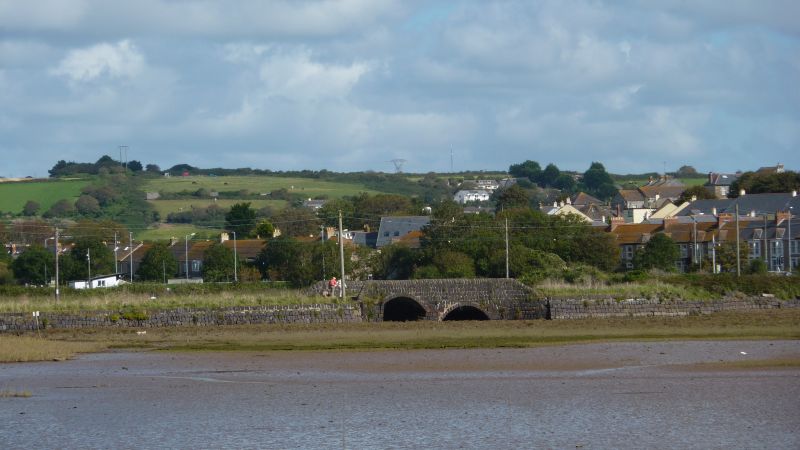 An early-C19 road bridge built of local materials including scoria block by the Cornish Copper Company for its own use.

A road bridge over Copperhouse Creek built in the early C19 by the Cornish Copper Company.

MATERIALS: built of copper slag blocks (scoria) with some brick repairs. The carriageway is gravelled.

DESPCRIPTION: the two-span bridge stands on a north-west/south-east orientation. The ends of the bridge are splayed out where they meet embankments with battered walls. The north span is taller and is segmental and asymmetrical, being higher at the abutment end. The south arch is round.

The bridge is faced almost entirely by coursed rectangular scoria blocks, mortared except at lower levels, with scoria blocks also providing the arch-rings and paving across the channels beneath the arches. Limited use of brickwork infills the irregular shapes where blockwork courses approach the curves of the arch-rings. The parapet coping is also of scoria blocks but these are edge-set and moulded to a pointed arch in profile.

On the north side of the bridge is a dam that comprises of three large shuttered-concrete blocks, 0.6m thick and 1.6m high, separated by two sluice gate gaps, 1.6m wide and 1m deep, narrowing to slender gaps between the blocks' bases. The sluice structure is probably of Second World War date.

The Hayle Estuary was an important focus for trade and the movement of people and ideas in the prehistoric period, but rapid decline set in during the later medieval period as the estuary became choked by silts from tin extraction along the valleys feeding into it. From the mid-C18 this decline swiftly reversed as Hayle serviced the tin and copper mining industry of West Cornwall. Hayle and Copperhouse developed around two rival foundries owned by the Cornish Copper Company and Harvey’s (of Hayle).

Extensive quays built from 1740 at the heart of the estuary facilitated the import of coal and other supplies required for the mines. A copper smelter built by Copperhouse Creek in 1758 further stimulated business on the quays. The difficult maritime and land access to and within the estuary was eased in by the construction of the Copperhouse Canal and Dock (1769), the Sea Lane or "Black" Road across Copperhouse Creek (about 1811) and by the development of the Hayle Railway (1837). Blocks of slag, called scoria, from the Cornish Copper Company's smelter, was used in these projects to provide a distinctive building material.

Black Road is a causeway faced in scoria block (hence the term ‘black’) and was built by the Cornish Copper Company to span the water channel flowing into Hayle Mills tidal pond. The road improved access between the works at Copperhouse and the company's main quay facilities at North Quay, which had been acquired by the company in 1780. The company obtained the freehold in 1811, which is the likely date of construction. Towards the centre of Black Road is Black Bridge. The bridge was altered in the early C19, supposedly to allow William Hockin, Rector of Phillack to pass under in his boat. By 1820 copper smelting had ceased and the Company began iron founding and engineering. It manufactured over 350 Cornish engines during its lifetime, before its closure due to bankruptcy in 1867.

During the Second World War, a reservoir to the north-east of Black Bridge is thought to have been used to store water for emergency fire-fighting purposes. It was an enlargement of an earlier, smaller pool formed by sluice gates inserted against the upstream side of the bridge by 1908. Similar but earlier sluices may have produced ponding behind the bridge as shown on maps of the 1830s and 1840s. Four large concrete blocks were installed, probably in the Second World War, to serve as the base for sluice boards. The bridge suffered some damage to the capping in the later C20, which was repaired in 1998. In 2018 Black Road and Black Bridge serve as a public footpath and have been subject to some alteration and repair in the later C20/ early C21.

* for the good survival early-C19 road bridge and its historic fabric, including the distinctive copper slag (scoria) blocks, which are indicative of the former industrial use of this bridge and a characteristic feature of Hayle.

* as a surviving component of the historically significant industrial port of Hayle, an internationally renowned centre for the production of steam pumping engines. The bridge is closely linked to the operation of the Cornish Copper Company foundry and North Quay.

* with a number of designated structures in Hayle Harbour including the Grade II-listed quays.