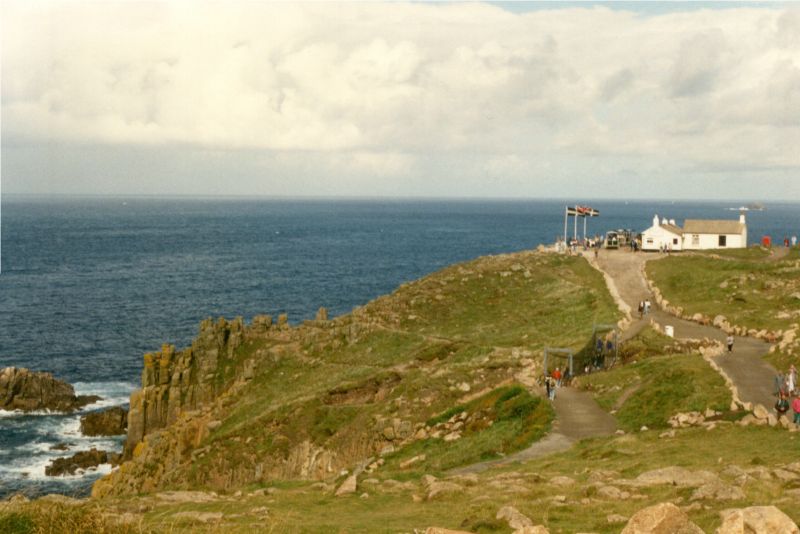 SENNEN LAND'S END
SW 32 SE
3/331 First and Last House
-
GV II
Former cottage, now a cafe. Circa qarly C19, extended circa early C20 in 2 phases
and later C20. Painted granite rubble, most of extensions rendered. Grouted scantle
slate roof sweeping lower at the rear of front range. Brick chimneys over the gable
ends and over cross wall (original gable end) left of middle. Cast-iron ogee section
gutters.
Plan: Overall T-shaped plan. Original formerly 2-room cottage on the left with
integral outshut which possibly contained shallow service rooms. In circa early C20
extended in similar style, on the right more than doubling the original size and
presumably a few years later a wing was added at right angles behind the middle.
There is a later C19 addition filling the rear right-hand angle.
Exterior: Single storey. Overall 3 window front. Original 2 window front cottage
is on the left with large window on its left, small window on the right and original
doorway between. C20 door and windows.
Interior: Remodelled for use as a cafe in circa early C20 and since. No original
fittings visible but presumably has its original roof structure.
Despite its increasing popularity since the later C19 as a tourist attraction, this
building has retained its simple character and is an important part of this rugged
landscape.