The Star Inn, including No.1 New Street and the former synagogue 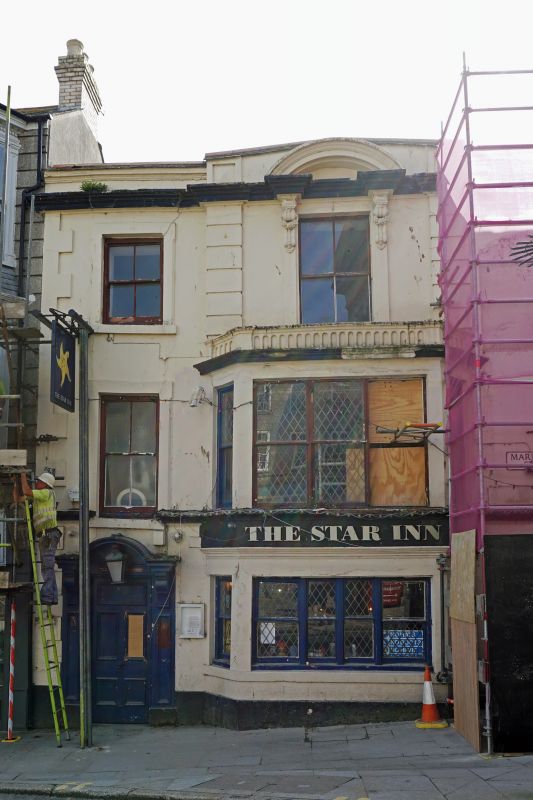 Entry Name: The Star Inn, including No.1 New Street and the former synagogue

A mid-C19 public house with two wings, incorporating an early-C19 former synagogue and an C18 dwelling, to the rear.

A mid-C19 public house with two wings, incorporating an early-C19 former synagogue and an C18 dwelling, to the rear.

MATERIALS: granite-and-brick main building with stucco-plaster detailing to the parapets, cornice, and quoins. The two rear wings are a variation of granite, hung-slate and brick. All the buildings have slate roofs.

PLAN: a long plot running north-west to south-east, with the Star Inn Public House facing onto Market Jew Street and rear wings arranged around a central in-filled courtyard to the rear.

EXTERIOR: the front elevation has three storeys and two bays. The principal entrance is an off-centre six-panel door to the left with an open pediment door case. Above is a sash window. To the right at ground and first-floor level is a two-storey splayed projecting bay topped by a parapet with a blind balustrade. The second storey has three two-over-two sashes, the central of which is flanked by rusticated pilasters. Above is a parapet which breaks forward at the centre with a segmental pediment supported by decorative consoles. The right return is on a slope and has a descending three, two and single-storey elevation with sash widows. To the rear are two wings. Linked to the main building by a C20 timber covered entrance, the south-west wing faces onto New Street. The street elevation is faced in ashlar granite blocks and it slopes down to the south. It has four bays which include, from the right, a tripartite timber sash, a central recessed-arch door, a three-over-three sash and an in-filled rectangular opening topped with stone voussoirs. There are four three-over-three sashes on the first floor. The south-east elevation is rubble stone with hung slate to the first floor. The slate roof is hipped. The north-east wing includes a former synagogue at the south end. This is a brick structure, partly rendered on the ground floor and faced with hung slates above. The north-east elevation contains two large, arched, sash windows. The slate roof is hipped and topped with a terracotta ridge.

INTERIOR: it has not been possible to access the interior. The main part of the public house has recently undergone refurbishment. The serving area is on the ground floor, with cellars bellow, and accommodation and toilet facilities on the two floors above. The former synagogue and No.1 New Street have most recently been used as a children’s play area with toilets and cold cellar below. Features relating to the former synagogue and the C18 dwelling may survive internally.

The Star Inn, previously known as the Star Hotel, was built in the mid-C19 and appears on the 1844 Penzance Tithe Map with outbuildings to the rear. To the south-east is No. 1 New Street, an C18 private dwelling. In 1768 the first purpose-built synagogue in Penzance was erected in the grounds of No.1. In 1807 a second synagogue was built on the same site. Both the synagogue and No.1 appear on the tithe map. In 1837, No. 1 and the adjacent building, No. 2 New Street, were sold to the neighbouring Jewish community and the synagogue enlarged. In 1907 the synagogue was sold to the Plymouth Brethren Christian Church. Nos. 1 and 2 New Street were later sold into separate ownership again. In the 1970s the synagogue was again sold to the Upper Room Christian Fellowship. In the 1980s it was used as an exhibition space. The internal fittings in the synagogue included a first-floor ladies' gallery and an altar. Between 1984 and 1987 internal fittings were removed: it is unclear how many of the early fittings survive. No. 1 New Street was also altered internally at round this time. In 1986 the synagogue and No.1 New Street were sold and incorporated into the Star Inn, at the time owned by Devenish Breweries in Redruth. In the late C20 there was further infill within the rear courtyard. Listed Building Consent was granted in 2014 to carry out alterations to the main public house area, including the internal re-arrangement of the ground-floor serving area and rebuilding part of the south-west elevation.

The Star Inn, Market Jew Street, including No. 1 New Street and the former synagogue is listed at Grade II for the following principal reasons:
* Architectural interest: the Star Inn has a strong façade with good quality stucco detailing and makes an important contribution to this prominent street;
* Historic interest: a good example of a mid-C19 public house, the Star Inn stands in the centre of the late-medieval expansion of the town; it includes an earlier C18 town house to the rear and an early-C19 synagogue which stands on the site of the earliest synagogue in Penzance;
* Legibility: the evolution and former use of the various C18 and C19 components that make up this public house are still clearly legible;
* Group value: the public house has group value with the other listed buildings on Market Jew Street. The former synagogue to the rear has group value with the mid-C18 Jewish Burial Ground on Leskinnik Terrace (listed Grade II) as evidence of the C18 and C19 Jewish community in Penzance.