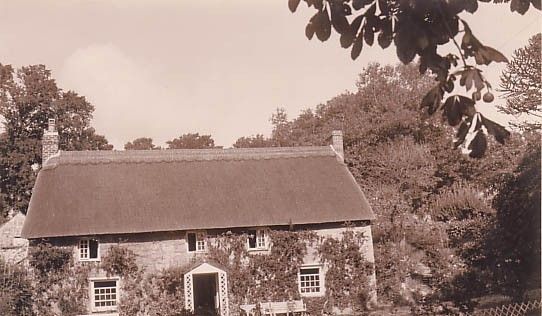 Farmhouse. Late C17 - early C18; additions to rear of later C18, with later
additions and alterations of C19 and C20. Rendered stone rubble; the rear wall
partly in rendered cob. Thatched roof with gable ends. Gable end stacks with brick
shafts, the stack to left rebuit in C20.
Plan: 2-room plan with central passage, with kitchen to left and parlour to right.
Circa mid C18, and outshut of single storey and loft was added to rear, with unheated
dairies and central stair. Later in the C19, a one-room plan wing was added to rear
left as a kitchen, heated from a gable end stack at the rear; this wing is built into
the bank at the rear. Further additions at the left side of the wing, of later C19
and C20.
Exterior: 2 storeys, asymmetrical 3-window front. Ground floor has panelled and
glazed door set in C20 thatched porch on wooden posts. C19 16-pane sash to right and
left with timber lintels. First floor has three 2-light 8-pane casements of early
C20. Right end has C19 16-pane sash at first floor to left. The outshut is to
right, with 6-pane light at ground floor and 16-pane sash at first floor; asbestos
slate roof. The rear of the outshut has two 2-light C20 casements at ground floor
and one at first floor. The left side is rendered; two single storey C20 additions.
To left is the rear wing with two C20 12-pane sashes and two C20 single lights at
first floor. There is a 2-storey addition at the side of the rear wing, with 16-pane
sash at ground floor and 12-pane sash at first floor, C20 replacements. The rear
wing has glazed C20 door at the inner side and gable end stack with brick shaft;
asbestos slate roof.
Interior: The passage is wide, with an C18 screen partition wall to left, with raised
moulded fillets. The front room has early C18 2-panelled door; C20 fireplace. The
room to front left has C19 6-panelled door with re-used HL hinges. Fireplace
rebuilt, with cloam oven remaining. The rear outshut has a dog-leg stair with stick
balusters. At first floor, the rooms are ceiled; the roof has trusses with roughly
hewn principal rafters and halved and pegged collars.