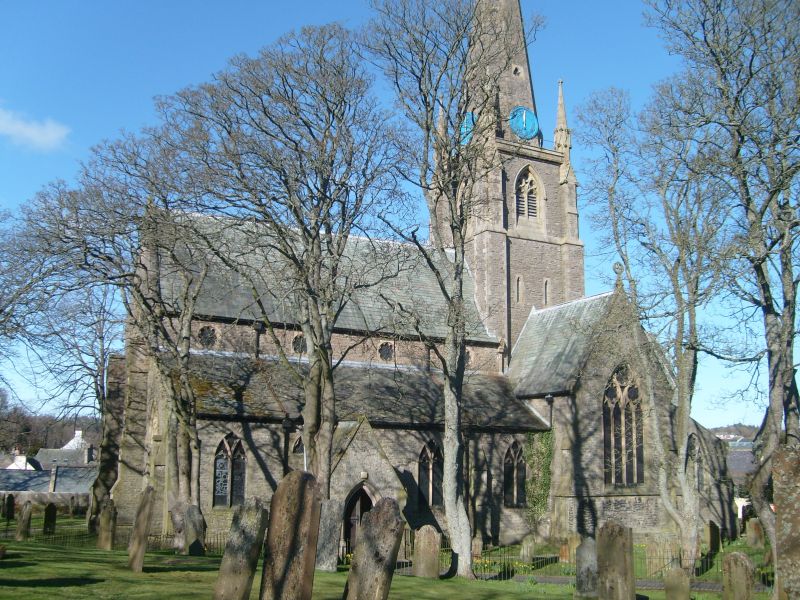 EXTERIOR: Tall and compact Decorated style church. The west front has panelled buttresses, 4-light nave window and 3-light aisle windows. Nave clerestorey windows are cusped circles, and the aisles have 2-light windows. Porches have steep gables and are flanked by pointed trefoil windows. Transepts have 4-light north and south windows and their aisle windows are 3-light to south and north, and 2-light to east. They also have north and south doorways to vestry and chapel respectively and the vestry has a stack with paired octagonal shafts. The tower rises 2 stages above the nave, with clasping buttresses rising to gabled caps and corner pinnacles to the plain parapet. The tower has 2-light belfry openings with louvres. A tall stone spire has quatrefoil lights, and clock faces in the main directions. The chancel has a 5-light east window, and 2-light north and south windows.

INTERIOR: The interior is elegantly proportioned. Nave arcades have round piers and leaf-band capitals to double-chamfered arches. Triple-chamfered crossing arches die into the imposts and the crossing is rib-vaulted with apex circle for bell ropes. The nave has an arched-brace roof on corbelled brackets, with scissor braces above the collar beam and tracery in the spandrels. In the aisles, the roofs are braced from the outer faces of the spandrels and the spandrels have pierced tracery as in the nave: this is both dramatic and unusual. Transepts have 2-bay east arcades similar to the nave but with leaf-band capitals of different design. Transepts also have arched-brace roofs boarded above the collar beams and the chancel has an open wagon roof. The chancel is enriched with blind arcading in north and south walls, and sedilia are under a crocketed arch with pinnacles. East and west windows have shafted rere arches. Walls are plastered. The sanctuary floor has diaperwork stone tiles, and there are raised floorboards below seating.

PRINCIPAL FIXTURES: The font is in bold Early-English style (1853), with detached marble shafts and leaf-band decoration around the bowl. It was probably designed by Clarke, as was the polygonal stone pulpit, which has blind trefoils. Benches have square panelled ends with buttresses and are later, as are the choir stalls with simple poppy heads and arcaded frontal. The east window by Hardman of Birmingham (1853) is a memorial to William Wordsworth (1770-1850) and was funded by public subscription. The west window is by C.E. Kempe (1891). Other late-C19 stained-glass windows of definite quality are attributed to Cox, Sons & Buckley and Ward & Hughes, and early C20 glass is attributed to Heaton, Butler & Bayne.

HISTORY: Parish church of 1852-54, replacing an earlier church destroyed by fire. William and Dorothy Wordsworth were baptised in the previous church, and their father is buried in the churchyard. The new church is by Joseph Clarke (1819 or 1820-1888), a London-based architect whose practice was very largely concerned with church-building and restoration. His known works date from the middle of the 1840s until the time of his death. He was diocesan surveyor to Canterbury and Rochester and, from 1877, the newly-created diocese of St Albans. These posts helped bring in numerous commissions in these three dioceses but he also gained jobs over a much wider geographical area and examples of his work can be found in most parts of England. He was consultant architect to the Charity Commissioners. The church was extensively restored in 1959.

REASONS FOR DESIGNATION: The church of All Saints, Kirkgate, is designated at Grade II* for the following principal reasons:
* It is an ambitious and accomplished church for the 1850s, its fine tall spire giving the building a commanding presence in the town.
* It has fittings original to the church, including font and pulpit, Hardman east window installed in 1853 by public subscription to commemorate William Wordsworth in his home town, and has late C19 stained glass of definite quality.
* Clarke's careful and inventive design (as expressed in the unusual roof arcading, and the impressive proportions of the interior) demonstrates a high order of achievement.
* The Wordsworth connection is of historical note.