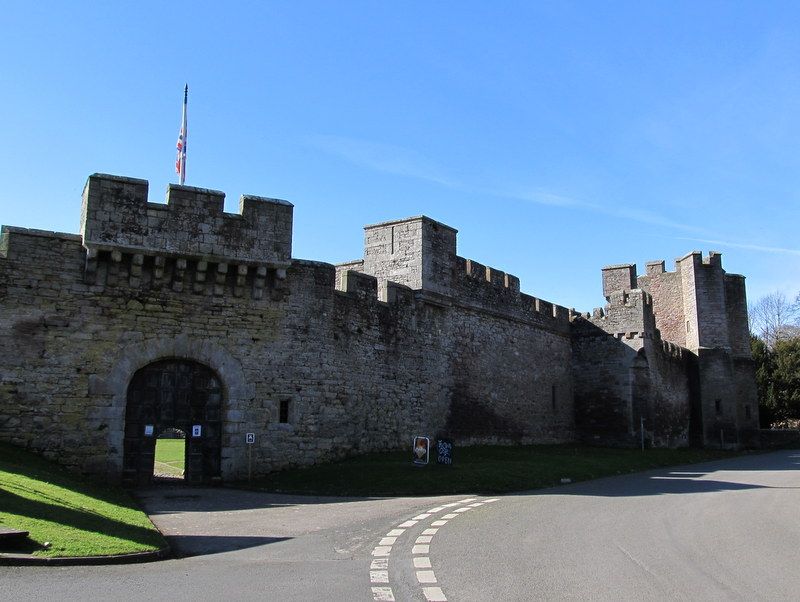 Curtain walls, gateways and associated buildings with integral stables and
domestic ranges. Partly late C15 or early C16 with C17 additions; unifying
early C19 alterations and additions by L.N. Cottingham for Lord Brougham, partly
demolished 1934. Walls of mixed sandstone rubble with C19 battlemented
parapets, without roofs. U-shaped wall, part of which was totally demolished
(but being rebuilt in 1986 in similar materials) with a left inner C19 gateway,
near which is an external C17 gateway and central early C19 2-storey, square
gate tower. Inside the wall beside the C17 gateway is a guardhouse under
parapet walk. Between the gateways is a 2-storey, 3-bay late C15 or early C16
range. Beyond the gate tower are the ruins of C19 stables and domestic ranges.
Right higher part of wall has C19 mullioned and cross-mullioned windows on
3 levels, which lit the domestic ranges. Gate tower has double studded panelled
doors in pointed archway; angled turrets with chamfered loops. Battlemented
parapet with central machicolation. Left part of the wall is lower and appears
to be of 4 different builds. C17 gateway has C17 studded panelled doors in a
round chamfered arch under a machicolated parapet. This doorway originally had
an inner lock dated and inscribed AP 1680 (Anne Pembroke), but now missing.
Further inner gateway has round arch. C15 range has Tudor-arched doorways and
2-light stone-mullioned windows. Guardhouse has similar doorway and barred
window; the interior is vaulted and has a fireplace in angle. Vaulted archway
behind C17 gateway. Rear of gate tower has large vaulted through archway under
replica C12 window. Stables are almost completely in ruins; the domestic range
beyond has segmental-arched openings with 2-light windows above. Cellars
beneath domestic range. Correspondence concerning the work done by Cottingham
between 1829-1840 are in University College Library, Cambridge. In 1986 walls
are being repaired and roofs being added to some buildings, other parts being
excavated, for eventual use as a craft centre. Left late C19 red sandstone
garden wall is not of interest.