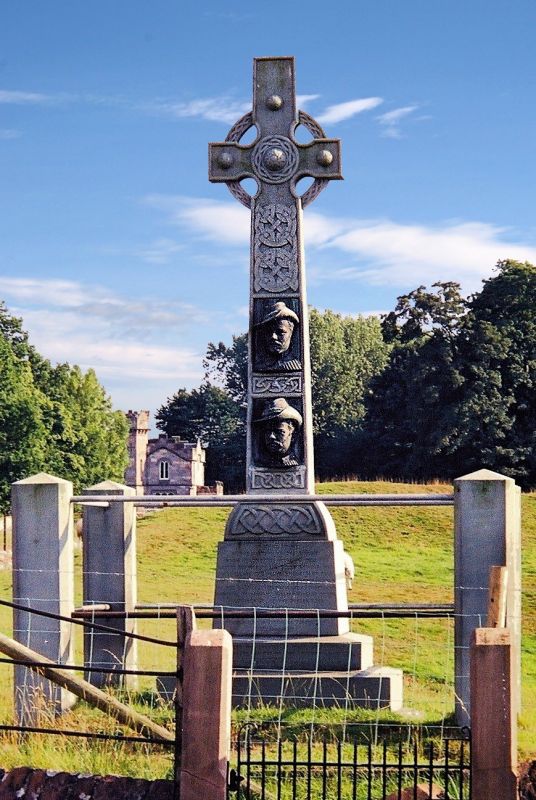 The memorial is situated within the corner of a field at a road junction and occupies the outer bank of a scheduled prehistoric henge (1007903). The memorial takes the form of a Celtic Cross upon a rectangular pedestal, set upon a larger square, two-stepped base. The front face of the cross head is decorated with bosses in relief with knot and interlace ornament. The upper part of the shaft is similarly decorated and the lower part of the shaft has bronze relief portrait medallions of the two casualties portrayed in slouch hats.

The inscription, on the front of the pedestal reads:
AT THAT CRISIS/IN THE HISTORY OF THE EMPIRE/WHEN VOLUNTEERS WERE INVITED FOR/ACTIVE SERVICE IN THE SOUTH AFRICAN WAR/THIS VILLAGE OF EAMONT BRIDGE SENT FOUR,/JOHN HINDSON, WILLIAM TODD, ARTHUR MARWICK/OF THE 24TH COY (WESTMORLAND AND CUMBERLAND)/IMPERIAL YEOMANRY, AND WILLIAM HINDSON, OF THE/VOLUNTEER COY OF THE BORDER REGIMENT/OF THESE/JOHN HINDSON AND WILLIAM TODD/WERE KILLED IN ACTION AT FABERS PUT/30TH MAY, 1900/THIS MONUMENT WAS ERECTED BY PUBLIC SUBSCRIPTION/ON THIS HISTORIC SITE GRANTED BY LORD BROUGHAM, AND VAUX 1901/DULCE ET DECORUM EST PRO PATRIA MORI
The inscription on the front of the stepped base reads:

The left return of the pedestal bears the inscription:

SECOND WORLD WAR/1939-1945, with the names of the three Fallen and their regiments listed below.

This List entry has been amended to add the source for War Memorials Online. This source was not used in the compilation of this List entry but is added here as a guide for further reading, 2 February 2017.

This war memorial was erected by public subscription to commemorate two soldiers who died on 30 May 1900 at Faber's Put during the South Africa war (1899-1902). Both men were serving as part of a 130-strong contingent of volunteers in the Westmorland and Cumberland Yeomanry, and had been in South Africa for only a couple of months. They had become part of Sir Charles Warren's column which was trying to track down a strong Boer commando force in very hard conditions in the Veldt. The column was surprised by the Boers at Faber's Put Farm in a dawn attack. Private Hindson was 27 years old and lived with his stepmother in the village. Private Todd was 25 years old, son of the miller.

The memorial was erected on land donated by Lord Brougham Vaux; the land in question is the outer bank of the Prehistoric henge monument known as King Arthur’s Round Table (scheduled ancient monument 1007903), and the inscription on the memorial records its deliberate placing on the prehistoric site. It was unveiled on 24 October 1901 by General Sir Charles Warren (who, as noted, was in command of the men's column at the time of the attack) at a ceremony attended by 150 Yeomanry and many distinguished guests.

The memorial was designed by W. Grant Stevenson R.S.A. (1849-1919) and was executed at Grisenthwaites Victoria Monumental Works at Penrith.
Stevenson was an Edinburgh based sculptor who is considered to have been a respected and talented artist. Working mainly in Scotland, he is most known for his Burns’ Statue at Kilmarnock in marble and his colossal bronze of William Wallace in Aberdeen, both of which commissions he won in open competitions. He executed many smaller works and almost 200 have been exhibited at the Royal Scottish Academy.

Eamont Bridge Boer War memorial is designated at Grade II, for the following principal reasons:
* Historic Interest: it is a poignant reminder of the impact of tragic world events upon an individual community, and thus has strong cultural and historical significance within both a local and national context.
* Design: by the noted Edinburgh designer, W. Grant Stevenson, it is a well detailed memorial incorporating rare examples of relief portraits of the Fallen.
* Rarity: Boer War memorials are relatively rare overall and represent the wider public's engagement with commemoration of the armed forces on a national scale.