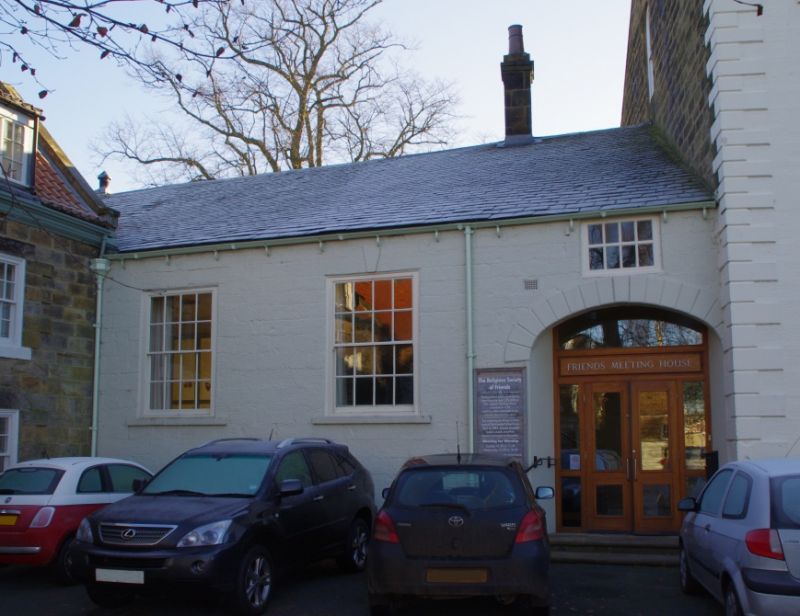 PLAN: a rectangular on plan, single-storey meeting house with a hipped roof, ridge chimney stack to the west and two ventilator hoods.

EXTERIOR: the meeting house is situated next to the Quaker burial ground at the south-east corner of High Green. It is oriented west-east. The main (north) front comprises the short length of the north elevation fronting High Green, having the appearance of a coach-house to the former Richardson mansion. It includes, from right to left, an elliptical stone arch that forms the main entrance, approached up two stone steps, and two eight-over-eight sash windows in plain window openings with flat arches and projecting sills (the window opening to the left dates to 1967). The wall has a low plinth and is painted. There is a small eight-light window over the arch, lighting the former passageway. The central part of the north elevation is obscured by the abutting Ivy Cottage (Grade II), whilst the eastern part of the north elevation, faced in red brick and including a modern sash window, largely dates to 1967.

The rear (south) elevation is an irregular composition. From left to right it includes another small eight-light window under the eaves, with two more windows below, lighting the passageway. Then there is a shallow projecting glazed extension with a shed roof, including French doors that open to the burial ground, followed by the four-bay elevation of the meeting house comprising pairs of large modern sash windows. The east elevation, facing into the burial ground, is a weatherboarded extension with a large full-height six-light window and glazed doors in the north and south returns.

The meeting house has a Lakeland slate covered hipped roof. There are two ventilator hoods in the ridge and a stone ridge chimney stack to the west.

INTERIOR: the meeting house interior was completely re-worked in 1967, with further alterations in 2001. The glazed timber double-leaf entrance door in the front archway leads into a lobby area in the older west side of the building, with toilets, a kitchen, and a children's room to the ground floor, and an inserted first floor room above. The original ceiling and ventilator recess are visible. The main meeting room to the east is now (2020) formed of the extension added in 1967. The interior partitions are mainly glazed, apart from the kitchen.

Throughout the C18 and early C19 many new meeting houses were built, or earlier buildings remodelled, with ‘polite’, classically-informed designs appearing, reflecting architectural trends more widely. However, the buildings were generally of modest size and with minimal ornament, although examples in urban settings tended to be more architecturally ambitious. After 1800, it became more common for meeting houses to be designed by an architect or surveyor. The Victorian and Edwardian periods saw greater stylistic eclecticism, though the Gothic Revival associated with the Established Church was not embraced; on the other hand, Arts and Crafts principles had much in common with those of the Quakers, and a number of meeting houses show the influence of that movement.

In 1700, an old house to the south-east corner of High Green was purchased to serve the Quaker Meeting that had been settled at Great Ayton in 1698. The present meeting house had been built on the plot by 1722. Baker (1999, 723) reports that the foundations of the old building remain under the road surface to the front of the meeting house. A burial ground was established to the rear.

In 1760, William Richardson built a mansion for his family to the west side of the meeting house. The Richardsons were successful local farmers and tanners. The mansion passed through the family until it was sold in 1841 to Thomas Richardson, founding partner of the Quaker broking house Richardson, Overend and Gurney. Thomas Richardson was the principal benefactor of the Friends’ North of England Agricultural School, which was established in the mansion on High Green. Pupils attended Meeting in the adjacent meeting house, which was separated from the mansion by a passageway and arch facing onto High Green. The burial ground was extended in 1787, 1873 and 1885.

The meeting house was extended to the east in 1967, to the design of Charles Spence, architect, and the interior fittings and partitions removed to provide a performance space for the school. When the school closed in 1996 its buildings were converted to residential use, but the meeting house remains (2020) a place of worship. It was refurbished in 2001, to the design of Edwin Trotter, at which time an upper room and stair were inserted into the west end.

* as a modest early-C18 Quaker meeting house, with a strong visual relationship with the adjacent former Friends’ North of England Agricultural School.

* as a purpose-built Quaker meeting house with attached burial ground.

* for its contribution to High Green, and its relationship with numerous other adjacent listed buildings surrounding the Green including the Friends’ School East and West Central buildings (both Grade II-listed).