Numbers 11 and 13 Including the Shoe Box 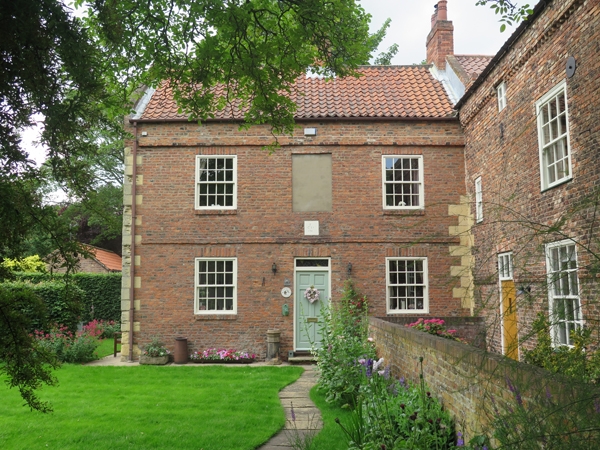 Entry Name: Numbers 11 and 13 Including the Shoe Box

HATFIELD STATION ROAD
SE6609 (SE 60 NE)
(south side)
16/55 Nos 11 and 13 including
15.9.82 The Shoe Box
GV II
House extended to form Workhouse, now 2 dwellings (partly unoccupied at time
T
of resurvey) and shop [The Shoe Box]. No 11 dated 'C D 1711', No 13 of c1720
with C19 additions; altered. Red brick in English garden wall bond, pantile
and C20 cement-tile roofs. C18 L-shaped range of 2 storeys with attics
having 3 and 2 windows to 1st floor facing east and south respectively on
internal angle; attached outbuilding set back on left of No 11, attached
single-storey additions around rear and front gable end of No 13. No 11 has
large quoins in angle on right and C19 panelled door with overlight flanked
on left by a 2-light horizontally-sliding sash with glazing bars beneath
cement-rendered head; later casement beneath cemented flat arch on right.
1st floor: band; datestone over door beneath blind central window; later
sash on left and unglazed opening on right with cemented flat arches; 2 brick
ridge stacks. Ruinous outbuilding set back on left has front gable and old
pantile roof. No 13 set at right angle on right: 6-panel door and overlight
within C20 porch, sash with glazing bars on right truncating low brick band;
2 casements to 1st floor. Single-storey addition on right has an 18-pane
sash. Front (east) gable of No 13 adjoined by 'The Shoe Box' with
segmentally-arched door flanked by large 4-pane sashes in coped (fall which
wraps around to right before adjoining outshuts at the junction of which it
envelopes a rebuilt lateral stack to rear of No 13. Originally built as a
private house known as Church Lodge, served as the Workhouse from c1720
until 1839 when it was divided into 2 dwellings.