A Grade I Listed Building in Ruscombe, Wokingham 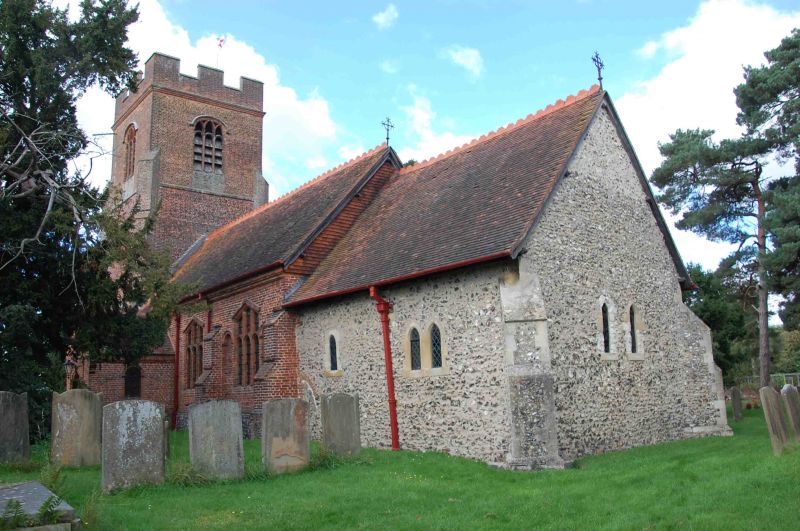 RUSCOMBE CHURCH LANE
SU 77 NE
(West side)
2/9 Church of St James
26.1.67
G.V. I
Parish church. C12 flint chancel with stone dressings, nave and tower rebuilt
in 1638 almost entirely in brick of the last phase of Gothic, with moulded
door and window jambs and tracery in the same material; moulded brick cornice
to nave, old tile gabled roofs; interior restored in 1859-60 and 1870-80 when
the north organ chamber was added. West tower: plinth with stone capping,
3 stages with diagonal buttresses of 3 stages at the angles stopping midway
up the walls of the bell chamber, string courses at the ringing stage and
bell chamber levels, small moulded brick cornice below embattled parapet
with stone coping. On the south wall of the ground stage is a 3-light
window, in the west wall a doorway of 2 continuous chamfered orders, the
inner 4-centred the outer square, a stone lintel over with key-stone; in
the west wall of the ringing chamber a window of 2 pointed lights under
a pointed head, and in each wall of the bell chamber an elliptical-headed
window with a moulded label of 3 acutely pointed lights each with an
elliptical sub-head. An iron weather vane over the south west corner
of flag shape with a crown between the letters C.R. and the date 1639
over. Clock on west face. Nave: 3 north windows each of 3-lights with
3-centred heads, the mullions are carried up and mitre with the mouldings
of the triangular main head over which is a chamfered label; between the
2 westernmost windows is a blocked 4-centred doorway with a segmental rear
arch. South wall has 3 similar windows and opposite the blocked doorway is a
pointed doorway with chamfered jambs and head, on either side of the
easternmost of these windows is a small round-headed recess with a moulded
lable. Porch on south wall is gabled with stone coping, moulded brick
kneelers against which the small cornices supporting the eaves stop; the
head of the doorway is semi-circular and has a moulded archivolt, flat
keystones and projecting impost mouldings, and is contained within a
square label and in both the side walls are semi-circular lights with
moulded labels. The south doorway of the nave and the outer doorway of
the porch retain their original nail studded doors. Chancel: 2 small
lancet windows on east wall with semi-circular rear arches, splayed inner
jambs and external chamfers, a similar window on the north wall, 2 windows
on the south wall the first a small C19 one of 2 pointed lights, the second
a small original lancet and at the west end of the same wall is part of the
pointed head of a blocked priest's doorway, over which is a relieving arch
of Roman bricks and on the second brick of the arch is a medieval mass
clock. Interior: 3 bay trussed rafter roof to nave, an open C14 roof to
chancel of collared rafters supported by arched braces, the braces to the
central pair of rafters and the wall plate are moulded. The wall between
the roofs of the chancel and nave is carried on a large oak rood beam and
the C17 tympanum has the commandments painted on the original plaster. On
the jambs of the east windows of the chancel are preserved some C13 wall
paintings. An early C17 hexagonal wooden pulpit, the lower part Cl9, with
an elaborate 12 sided sounding board. At the west end of the nave are 2
C17 carved oak pews. Monuments: south wall of chancel:- a stone aedicule
panel with central cartouche of anus to Gwyn, 1705: A stone aedicule
panel to John Aldworth, 1710 and wife Mary. On west wall of nave over
door to tower :- a projecting central panel, side pilasters set back with
side scrolls and carved drops to Letitia, first wife of Reginald Fellows,
citizen of London died 1706 and to Catherine his second wife died 1716:
on north wall of nave:- to James Eyre, Lord Chief Baron of the Exchequer
and lord Chief Justice, 1799, a black pyrimidal background to a broken column
and figure of Justice R. Westmacott, sculp: to the east of this to Walter
Knight 1771, an aedicule panel with Boric pilasters.
VCH Vol. III p.205. B.O.E. (Berkshire) p.208.