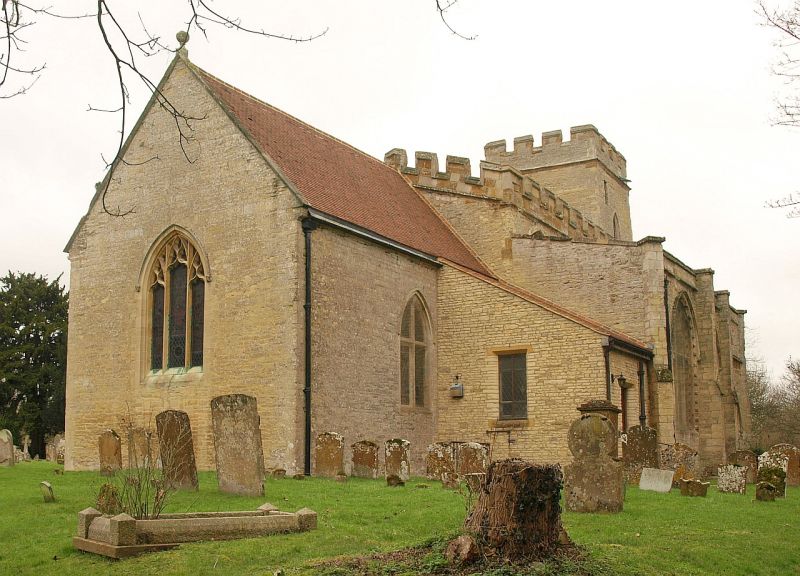 Parish Church. C13 and C14, chancel rebuilt early C18. Rubble limestone with
some ironstone dressings. Lead roof with parapets to aisles, battlements to
nave and tower. Tiled roof to S. porch and chancel. West tower, clerestoried
nave, S. aisle and projecting porch, N. chapel and porch, in one plane;
chancel. C13 tower with lancet to ground floor, 2 upper stages with simple
openings. C14 aisles, windows having plain mullions and transomes inserted
C18. N. chapel has 2 windows with fleuron decoration in the surrounds. N.
porch is 2-storeyed and has wide ogee arched door, sexpartite vault with
carved boss. Small C20 vestry in angle of N. chapel and chancel. Interior:
C13 tower opening, C14 nave arcades, fleuron decoration to capital of N.
chapel column. C13 chancel arch, widened C18. Plastered ceilings. Fittings.
Georgian panelling, pews, some now removed. C18 pulpit and altar rails.
Stained glass; S.E. window by Kempe 1904, S. window by Kempe and Tower c1910.
Monuments. Brass to Roger Hunt 1473 and wife(nave). Brass to Thomas Malyn 1536
and wife (N.chapel). On W. wall of N. chapel is a tablet to Sir William
Pritchard,d.1704, Lord Mayor of London and President of St. Bartholomews Hospital
founder of the nearby school and almshouses (q.v.). A draped panel with deathshead
holding upper corners of drapery in surround of Doric pilasters, entablature
and broken segmental pediment with central cartouche of arms. The base has
carved brackets under the pilasters and side scrolls and central inscription
to Sir William's only child, William who died in 1685 aged 16, with two cherubs'
heads below. On the E. wall is a sarco phagus shaped tablet of white marble
surrounded by Sienna to Thomas Uthwatt, d. 1754 and his wife d.1769.This stands
in front of a white background curved at the base with crossed torches and with
a cornice head forming the base to a black obelisk with urn and coat of arms.
There are other Uthwatt monuments in the church, C18, C19 and modern.