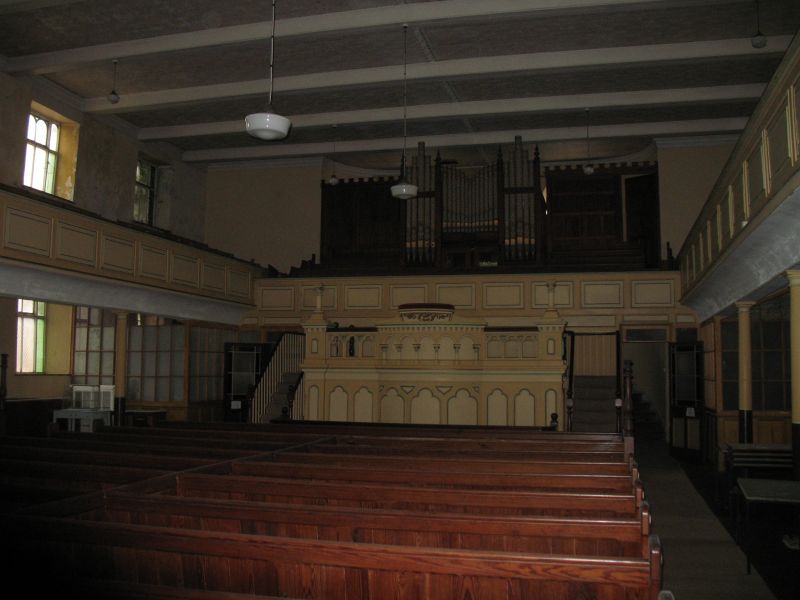 Wesleyan Methodist Chapel, now Methodist Church. Dated 1815 in gable; altered
in later C19 and early C20. Uncoursed killas rubble with granite dressings, the
front rendered and the sides and rear cement-washed. Rectangular plan with
shallow apse to rear. Two storeys, 2x5 bays; the symmetrical pedimented facade
has a plinth, cornice, and large raised corner pilasters with sunk round-headed
panels and coped upstands above the cornice; a wide central doorway with
Tuscan pilasters, plain frieze and cornice; 2 windows at 1st floor with raised sills
and floating cornices on fluted consoles, formerly sashed but now of 2 round-
headed lights with stained glass; and a plain roundel in the pediment containing
the raised date "1815". Both side walls have square-headed windows like those at
the front (added wing attached to 5th bay of right-hand side, not of special
interest). The apse at the rear has rounded corners and 2 tall round-headed
windows with intersecting glazing bars. Interior: horse-shoe gallery with panelled
front, supported on wooden Tuscan columns, and completely furnished with 3
tiers of original box pews which have ramped sides and doors with H-hinges, and
6 turned lamp-standards with oil-lamps; former "City Road" arrangement of
communion rail behind pulpit reversed, but fragments of the original remain
behind the inserted rostrum, and the windows of the apse have cornices with
fluted consoles (now concealed from the body of the church by the organ).
History: replaced octagon chapel built in 1770; modelled on Wesley's City Road
chapel, like Camborne Centenary Chapel, Wesley Street, Camborne (q.v.).
Reference: J.C.C.Probert The Architecture of Cornish Methodism (1966); Thomas
Shaw A History of Cornish Methodism (1967).