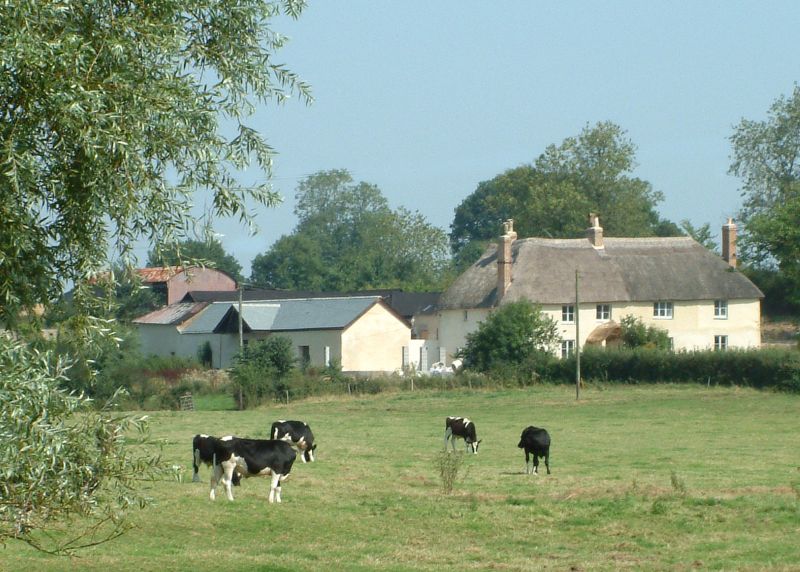 Farmhouse. Late C16 - early C17, maybe earlier. Some early C18 modernisation, a
major late C19 refurbishment. Plastered cob on stone rubble footings; stone rubble
stacks topped with C19 brick; thatch roof.
Plan: the main block faces south-west and has a 3-room-and-through-passage plan.
At the right (north-east) end is an inner room kitchen with an end stack. Next to
it is the dining room, the former hall, with an axial stack backing onto the
passage. The left (south-western) room is a lower end parlour with an end stack.
There is a second parlour in a 1-room plan rear block this end. Its stack backs
onto the front parlour. At the right end there is a 1-room plan rear dairy block.
The stairs rise in an outshot between the rear wings. The present house is the
result of the late C19 refurbishment but the layout of the front block suggests C16
or C17 origins, maybe as some form of open hall house. The house is 2 storeys.
Exterior: irregular 4-window front of C20 casements with glazing bars. The passage
front doorway is left of centre and it contains a C19 part-glazed 6-panel doorway
under a contemporary flat hood on shaped timber brackets. The roof is tall and
steeply pitched and is hipped both ends.
Interior: shows mostly the result of C19 and C20 modernisations and most of the
joinery detail is C19 and C20. All the fireplaces are blocked and hall and lower
parlour have quite grand C19 marble chimneypieces. The kitchen has a late C16 -
early C17 chamfered and step-stopped crossbeam, the only exposed carpentry in the
main block. The main block roof was not inspected but the bases of straight
principals show at first floor level, their scantling large enough for C17 or early
C18 A-frame trusses. The dairy has a chamfered and runout stopped crossbeam and the
old door into it from the rear outshot contains a ventilator grille.