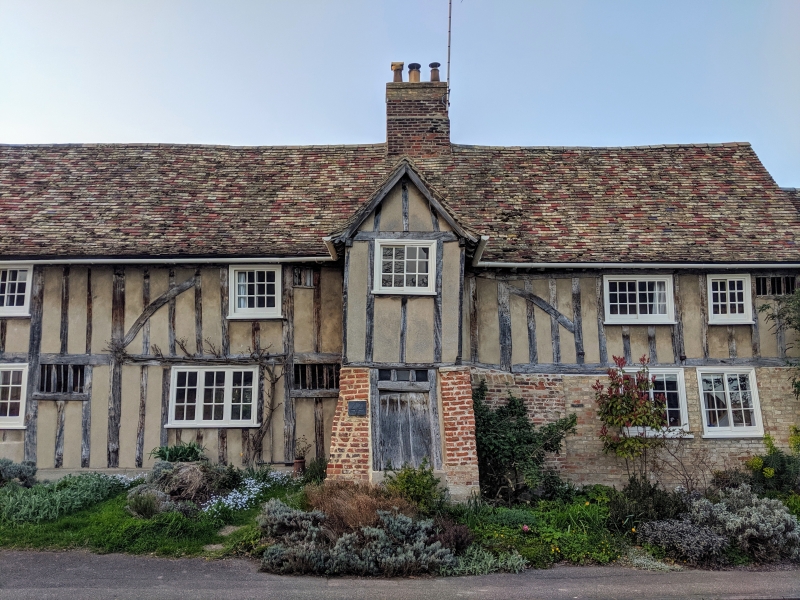 House, now two dwellings. Mid C16, extended by one bay early C19, and again
probably later in C19. Timber-framed, red brick, gault brick, painted, and
clay bat, roughcast rendered. Tiled roof with original ridge stack of red
brick with some rebuilt upper courses. Another stack is now also internal
but was at the gable end, probably late C17, and also with rebuilt upper
courses. Single range of five bays, including a narrower intermediate bay,
with lobby entry and probably an original two storey porch. The plan was
extended by one bay at each end in early and later C19. Two storeys.
Timber-framing now exposed. Substantial framing with downward bracing in
wall frame at first floor. Jowled heads to posts, but rear wall plate in
four lengths with scarf joints. Gabled two-storey porch. Tiled and framed,
with ground floor framing cased in C16 or C17 red brick. Ogee moulding to
middle rail above the original doorway, now blocked, with chamfered surround
and three;light fanlight above. The hollow and roll moulding of the mullions
are similar to the original windows in the house. Original (floor of planks
and three battens with contemporary iron nails. House has two original
windows with hollow and roll mouldings. Two similar windows at ground
floor. Other windows are C19-C20, and there are several blocked doorways,
dating from the time the house was converted to four dwellings.
Right hand addition of clay bat, tiled. One bay. Two store?is. One window
at ground floor and one C19 with horizontal sliding sash in the end. C19
brick addition to left hand. Painted. Tiled roof. Inside: abutting
hearths, one having a large inglenook of brick and clunch. This room has
stop chamfered main beam and middle rail forming a cornice. The bay to the
right hand, possibly a buttery, possibly remained without a floor until early
C19 when the clay bat extension with its grey brick stack was added. The
other C16 hearth is smaller and of dressed clunch blocks with some brickwork
in herringbone pattern. Some repairs have had to be undertaken at a fairly
early date to the front wall plate. In late C17 a small hearth was added to
the left hand gable end. This is now internal. The hearth is of red brick,
with plastered jambs and is decorated with foliated stenciled patterning
probably contemporary. The tiebeam to this end truss was probably removed at
this time and a new tie inserted. There is some evidence of disturbance at
the joints with the wall plate and the tie appears to be reused.
R.C.H.M. West Cambs., mon.(5)