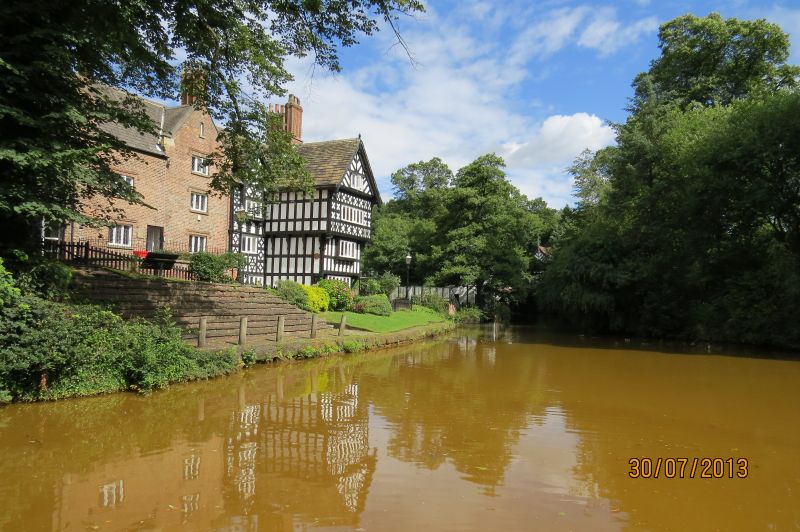 Group of several houses. On site of 1760 packet house but
largely of C19 including a considerable timber-framed wing
of c.1850 which was built for the first Earl of Ellesmere.
English garden wall bond brick with slate roof and timber
framing with stone slate roof. An irregular 2, 3 and 4-
storey range with a total of 4 bays and with wings and
additions to rear. Bays 1 and 2 are brick and have 3-light
timber-mullioned windows with flat brick arches, brick
hoodmoulds and stone sills. Bay 2 is gabled. Picturesque
shop front to left return. Coped gables with kneelers and
finials. Bays 3 and 4 are timber-framed. Bay 3 has an ovolo-
moulded door surround and a 3-light ovolo-moulded timber-
mullioned window on each floor including to a gabled dormer
window. Bay 4 projects as a large gabled crosswing. Each
floor, and the gable,is jettied out on carved brackets. 3, 4
or 6-light ovolo-moulded timber mullion window to each
floor, decorative framing to the second floor and enriched
barge boards and finial. Gabled porch to right return.
Clustered and single diagonally set chimney stacks. All in
all a pleasing and picturesque composition which dominates
the canal basin. The timber-framing is one of several
examples for the 1st Earl of Ellesmere all of which are a
particularly early revival.