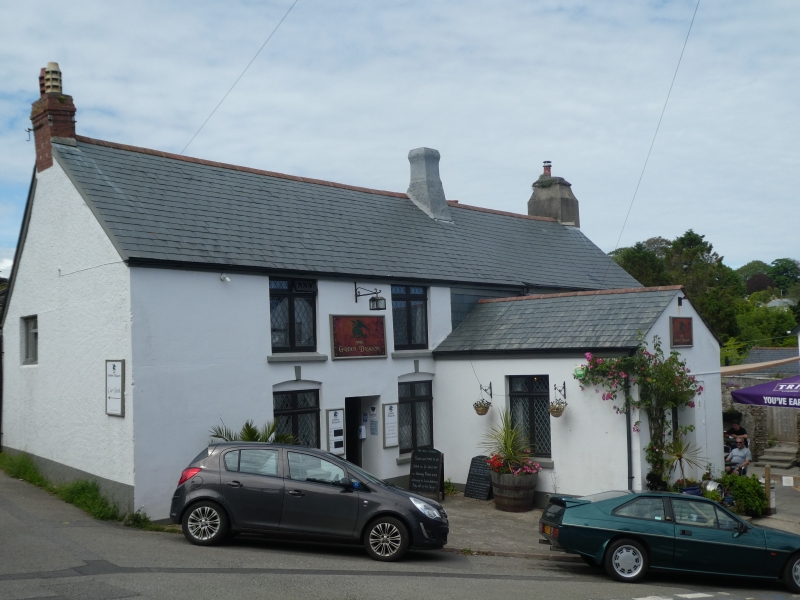 Public house, possibly originally the church house. Circa early to end C17,
extended in circa late C18 or early C19 and remodelled and extended again in
circa mid C19. Rendered local stone rubble. Bitumen-coated slate roof over
right hand end, reclad in asbestos slates over left hand end. Gable end and
axial stacks, heightened in brick in late C19, the lower right hand end
stack projects.
Plan: Probably originally a 3-room and through or cross-passage plan,
facing south, the lower end to the right (east). The hall has an axial
stack at its lower right hand end and a stair turret (stairs removed)
projecting at the back. The former inner room at the left end is now one
large room with the hall (the bar). The inner room has a gable end stack.
The lower right hand end, heated from a gable end stack, was converted into
a small 2-room plan cottage with a central entrance in circa mid C19. The
1-room plan wing behind the lower end is probably a late C18 addition before
the conversion of the lower end to a cottage, but the other 1-room plan wing
in the angle to the left is probably contemporaneous with the conversion.
The single-storey outshuts behind the higher end and the small 1-room plan
wing at the front of the hall are C20 additions, the front wing probably
replacing an earlier outshut, the side wall of which remains. As an
alternative to a 3-room plan, the original house might have had 2-room plan
with a central entrance and the lower left end may be a late addition.
It is said to have been a church house originally and the 2-room plan
arrangement with a large fireplace and oven at the right hand end would be
consistent with this type of building.
Exterior: 2 storeys. Asymmetrical 4-window south front, 2 windows on
either side of the small projecting wing at the centre. To the right of the
wing a symmetrical 2-window arrangement with a central doorway; circa mid
C19, 12-pane sashes, those on the first floor replaced in the C20 with
facsimiles, late C19 or early C20 glazed and panelled door with a
rectangular overlight. To the left of the front wing a 2-window range of
C20 casements and a C20 central door. The wing has a blocked doorway in its
front gable end. On the right hand side of the wing a stone rubble wall
with slate coping is probably the side wall of a demolished outshut at the
front. To the left of the front a Sun Fire Insurance plaque.
At the back there are 2-storey wings behind the lower left hand end, one-
gable-ended, the other with a hipped roof. To the right behind the higher
end a C20 single storey outshut.
Interior: The putative hall, i.e the lower right hand end of the bar has a
large open fireplace with a chamfered timber lintel with ogee stops,
corbelled out on the left hand side on 3 corbel stones with rounded
chamfered ends. In the right hand side of the fireplace is a large stone
rubble vaulted oven which appears to be original. The ceiling in this room
has 2 chamfered cross-beams with ogee stops, the joists are also chamfered.
At the higher left end of the room there is a small fireplace with an
unchamfered timber lintel, probably heating the former inner room, the
partition between the hall and inner room having been removed. The lower
end room has no visible early features. The first floor joinery appears to
be C19 and C20.
Roof: Single roof structure of straight principal rafters with thin
lapped and pegged collars.