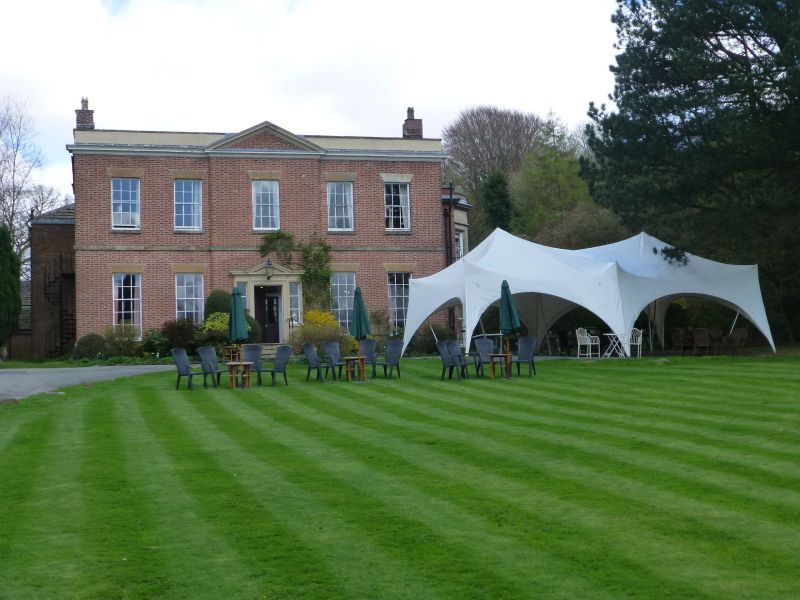 Manor house, now premises of North West Water Authority. Various builds,
dated 1694 over rear door, 1700 on rear wing, and 1774 on rainwater heads
of front range, with other alterations and additions: all these being
successors to a timber-framed courtyard house built in late C15. Oldest
surviving parts to rear are of coursed thin sandstone rubble with quoins,
the upper floors of watershot coursed squared sandstone; and the front
range of 1774, together with the front of a late-C19 extension to the rear
east corner of this, of brick with stone dressings; all with slate roofs.
Now U-plan facing south-west, the front range being a double-pile addition
to the earlier building round the rear courtyard. Front range is 2-storeys
in classical style, symmetrical, 5 bays with pedimented centre; stone
plinth, band, moulded cornice, parapet concealing 2-span roof with gable
chimneys; central doorway and side lights in pedimented stone architrave up
4 steps, four 15-pane sashed windows at ground floor and five 12-pane
sashes at 1st floor, all with splayed stone heads; similar windows in
return walls, some blind, rainwater heads dated 1774; prominent late C19
wing with 2-storey canted bay. Rear: rear doorway with moulded surround
and lintel lettered in relief "16 W B 94", single-light restored window to
left of this, and further left a 6-light window with cavetto mullions and
hoodmould, at 1st floor two 2-light casements in remains of former
mullioned windows; above this an added storey in watershot masonry finished
in brick; north-west wing similarly raised has on this side a blocked
4-light mullioned window under a hoodmould projected to the angle of
junction, at 1st floor 3 windows of C16 type with round-headed lights,
hollowed spandrels and chamfered flush mullions (2,2, and one light),
between the 2nd and 3rd a carved datestone lettered B ; quoins and a
W M
1700
kneeler at the corner, and continued in this line a single-bay low 2-storey
addition with a doorway at the junction, a 3-light chamfered flush mullion
window on each floor, quoins, and large brick gable chimney: other side of
this wing has inter alia the returned ends of a hoodmould and jambs of a
former mullioned window broken by a large inserted window, and 2 blocked
2-light windows above. Interior altered, but ground floor of rear has
chamfered and hacked beams, and front range has a stairwell with Adam-style
decoration in the lantern. Reference: VCH Lancs V pp.286-291.