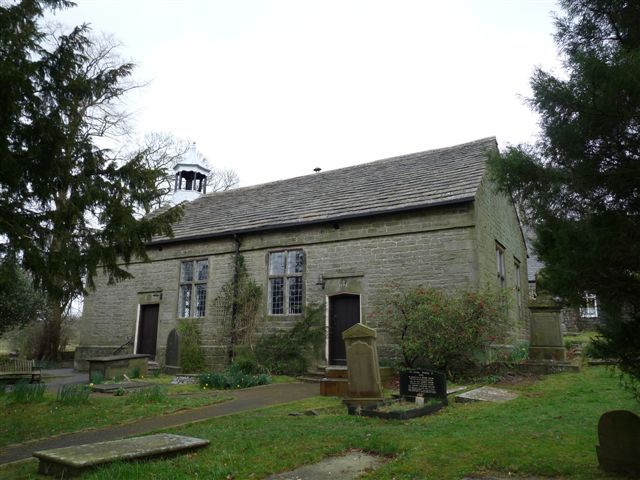 Unitarian chapel. Dated 1703. Squared sandstone with quoins, chamfered
plinth, stone slate roof with gable bellcote. Both sides and both gables
have 2 large cross-windows with small panes, the panes diamond-latticed in
the gable walls and rectangular in the side walls; flanking the windows on
the south side are 2 doorways with chamfered surrounds, that on the right
with a pointed head and lintel inscribed "1703". On the west gable is a
small hexagonal bellcote with a swept roof. Attached at the north west
corner is a single-bay 2 storey wing with roof hipped down to the junction
but gabled at the other end, with a tall chimney stack; this part has a
door and one window on each floor of the west side and two 2-light square-
mullioned windows on the east side, mostly with diamond lattice glazing.
Interior: original box pews including choir stall at east end; between
windows on north wall a raised 5-sided panelled pulpit with carved frieze
and moulded cornice, and further east on the same wall a very large C18
wall monument to the Willoughby family of Parham, very fully lettered and
with coats of arms and shields on the panel above the lettering; between
windows on south side, Willoughby family pew with panelled reredos and very
prominent moulded and carved cornice in classical style. NB: in graveyard
at east end of chapel is the gravestone of Samuel Oldknow "of Nottingham,
late of Anderton" ob 1759, one of the earliest textile factory builders.
(See also Roscoe Lowe Farmhouse, Anderton CP).